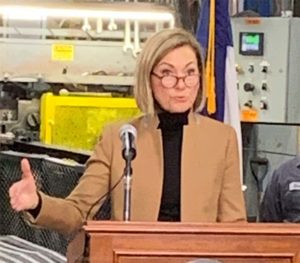 DES MOINES — Governor Kim Reynolds says she is confident the $5 BILLION coming to the state from the recently passed federal infrastructure bill would be spent appropriately.

“Why wouldn’t we be confident that that money would be spent appropriately? That’s a ridiculous question.  A lot of it is a sup-up (supplemental appropriation) from existing programs that are already in place. There’s some of the money that’s not that can be utilized on new programs. We are waiting on them to give us the criteria on how the money can be spent,” Reynolds says.

Reynolds says that is not the biggest concern with the federal money. “I tell you what we do need to think about though is the amount of money that is being spent in Washington, D-C. The impact that that has on inflation, the impact that that has on working families trying to make ends meet. Tax and spending policies are going to continue to drive inflation — and that has an impact on hardworking families,” according to Reynolds.

Reynolds made her comments earlier this week after pardoning two turkeys at Terrace Hill.