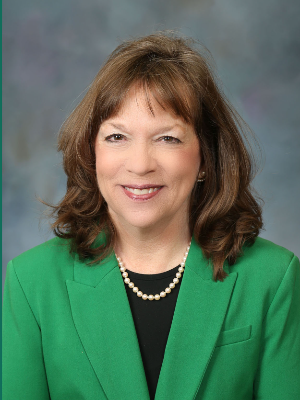 MASON CITY — The outgoing President and CEO of the Mason City Chamber of Commerce was recognized along with others at the Chamber’s 106th Annual Meeting on Thursday.

Robin Anderson was surprised with the Distinguished Citizen Award at the meeting. She is a servant leader who has committed her career with the Chamber to improving the north-central Iowa community.

Among her accomplishments were helping to revitalize the Historic Park Inn, bringing Sculptures on Parade to the city, creating murals on the backs of downtown buildings, moving and restoring the Egloff House, and after two decades of efforts the construction of the Principal Pavilion.

Anderson is preparing to retire at the end of the year.

== Anderson was joined by two others in receiving the Distinguished Citizen Award, as Des Moines attorney Andrew Anderson and Johnston businessman Dan Robeson were commended for their work behind the scenes to ensure the success of the Historic Park Inn Hotel project.

Anderson previously served as the chair of the Vision Iowa board and encouraged Mason City’s application for the $9.2 million remaining in the fund.

Robeson, a Nora Springs native who is the CEO of Iowa Business Growth, used his experience as a banker and economic developer to mastermind the complicated financing package necessary for the project.

== Midwest Construction received the “Small Business of the Year” award. CEO Kalliope Eaton and President P.K. O’Handley accepted the award on behalf of the family-owned company.

== Dr. Noemi Cruz-Orcutt, the owner of Mint Springs Dentistry, received the “Boss of the Year” award based on a nomination submitted by her staff members.

== Kingland was the winner of the “Workplace Wellness Award”, an award given jointly by the Chamber and the Cerro Gordo County Department of Public Health to recognize a worksite that emulates total worker health and well-being.

== Mary Holmes was named “Ambassador of the Year” in recognition of her commitment and hard work as a member of that committee.