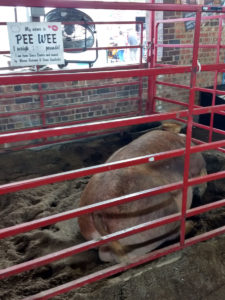 DES MOINES — The Iowa State Fair Blue Ribbon Foundation has announced plans to spend millions of dollars to renovate the livestock barns on the fairgrounds.

Foundation executive director Peter Cownie says the cattle, horse, sheep, and swine barns will each get an update. “The structures themselves are historic, you know, nearly a century old in some cases. Those will stay the same, but we need to renovate and restore the barns,” he says. “They are all unique, they all have different issues that have occurred over time,”

Cownie says the barns have a constant flow of visitors and exhibitors through them during the fair’s run. “You know, that’s where the 4-H and FFA youth show their livestock. They compete in the livestock competitions. The Iowa State Fair is the climax of their summer, and of all the competitions from the county fairs, and that is really the backbone of the Iowa State Fair youth in agriculture and what they do on these barns,” Cownie says. “And so to be able to renovate and restore them is really quite exciting for us.”

Cownie says they will have more details on the renovation schedule when they meet in October. “It’ll take us a few years to do it — but we’re gonna get started in time for next year’s fair to have some improvements done,” according to Cownie. ” We’re going to make the specific decisions this fall on which ones go first and what order it will be. But we will have progress made by next year’s fair, no doubt.”

Cownie says the work on the Iowa State Fairgrounds is like anyone has with their house — there’s always something that needs to be worked on to keep it up. “What we strive to do is we want to maintain our heritage, we want to maintain our traditions. We love the fact that these buildings are historic, in our state,” he says. “We want those to remain historic, and we want them to remain upgraded so that people have the same memories that, so that the kids have the same memories as their parents and grandparents did.”