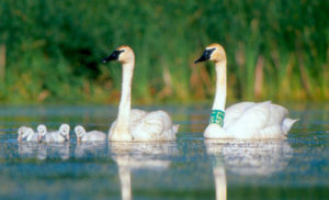 DES MOINES — The Iowa Department of Natural Resources has identified a record number of trumpeter nests. The species was reintroduced in Iowa in 1993.

“Their population has been slowly recovering since then,” DNR waterfowl biologist Orrin Jones says, “and we’re really pleased to see them continue that recovery.”

According to the DNR’s website, unregulated hunting and the draining of wetlands after European settlers arrived in Iowa led to the demise of the species. The last known pair of wild trumpeter swans was reported in a wetland near Belmond 139 years ago. Now, in the 29th year of the restoration effort, the latest count indicates there are at least 135 pairs of adult nesting swans in Iowa.

“Trumpeter swans are traditionally associated with the Prairie Pothole region of Iowa, which is a geographic formation in north central and northwest Iowa where historically pothole wetlands were very abundant,” Jones says.

Jones says restoration of wetland areas has helped the species get re-established in Iowa. The DNR began its trumpeter swan restoration program in 1993. In 1998, three wild cygnets hatched from a nest in Dubuque County.