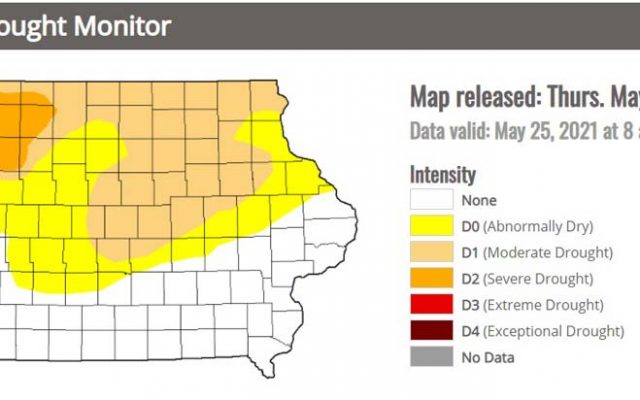 AMES — Forecasters say Iowa’s rollercoaster weather will see temperatures rocket back into the 80s and 90s this week after frosty lows dropped into the 30s just last week.

The return to summery heat means more worries about drought as the recent rains weren’t enough to reverse months of dry weather. Adam Hartman, a meteorologist with the Climate Prediction Center, says the ground remains very arid, despite several downpours.

“When you have heavy rainfall in a very short period of time, it doesn’t allow the soils enough time to absorb that moisture,” Hartman says, “Instead you actually get more runoff than absorption.” The drought started last summer and the latest U.S. Drought Monitor map shows most of Iowa remains in the categories of abnormally dry, moderate drought, or extreme drought.

Meteorologist Dennis Todey, director of the U.S.D.A.’s Midwest Climate Hub in Ames, says even with the May rains, there just isn’t enough moisture in the soil for plants to thrive.

“We are at greater risk of having problems with crops and other plants as the season goes along,” Todey says, “because there’s not as much moisture available for the crops to be able to grow.” It’s hard to say how long the drought will continue, as summer often brings localized thunderstorms which can be difficult to forecast.

Todey says long-term drought could create problems for water quality in Iowa. The amount of water flowing in the Raccoon River, the main source of drinking water for Iowa’s largest city, dropped down about 90-percent from normal during May.