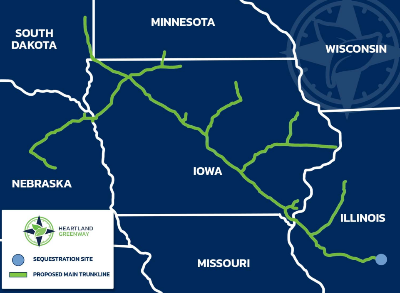 DES MOINES — The first of dozens of public meetings was being held today on a proposal to build a carbon dioxide pipeline that would run the length of the state and cross land in four counties in our immediate listening area.

The Heartland Greenway project would pipe pressurized carbon across some 13-hundred miles and five states, terminating in Illinois.

The pipe would go through Jessica Wiskus’ land in rural Linn County. She hopes to organize neighbors against the project, which she says presents safety concerns. “They want us to think we can’t do anything,” Wiskus says. “They want us to think it won’t matter if we talk to our neighbors, but I think that they underestimate our character and I feel that this issue actually unites us.”

The project would capture carbon emissions at multiple ethanol plants across the five states. Some researchers say carbon capture is vital to lowering emissions, but Wiskus is worried about how safe and effective the project is and she’s organizing against it. “It unites the farmers. It unites the farmer’s daughters, like me. It unites rural and town folks. It unites the environmentalists. People on the right and the left,” she says. “And the fact that this issue can unite us is what gives me hope.”

The first meetings were being held in Rock Rapids and LeMars today. Local meetings will take place in Kossuth, Franklin, Butler and Floyd counties:

== The meetings in Franklin and Butler counties will take place on Thursday December 16th, at noon at the Franklin County Convention Center in Hampton and at 6:00 PM at the Greene Community Center

For more information about the project and the public hearings, click on this link.