Plenty of damage, no injuries reported, as at least 12 tornadoes tear across Iowa 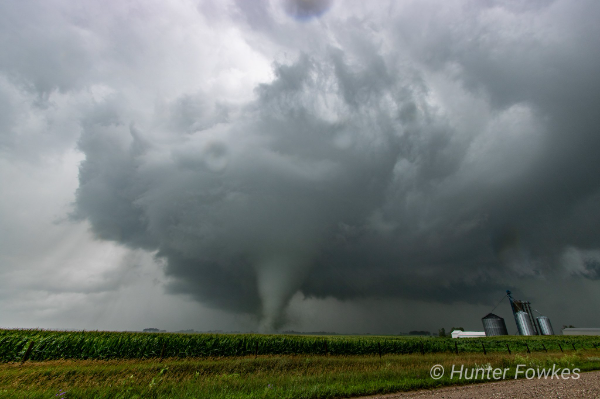 Tornado between Stanhope and Radcliffe (Photo by Hunter Fowkes)

JOHNSTON — Nobody knows yet just how many tornadoes touched down in Iowa on Wednesday afternoon and evening, but the National Weather Service says there were at least 12 and perhaps as many as 16. Miraculously, there are no injuries reported, but there’s damage to homes, businesses, trees and power lines across central and eastern Iowa.

Meteorologist Brooke Hagenhoff at the National Weather Service in metro Des Moines says they’re sending survey crews to the worst-hit communities. “The most important thing is to go to the areas that had the most damage,” Hagenhoff says. “That for us today is going to be in Calhoun and Hamilton counties and also Bremer and Butler counties, and we’ll also likely swing through Tama County where Dysart got some damage.”

In this age where practically everyone has a smartphone, she says there’s plenty of evidence to sift through documenting the storm cells, large and small. “For areas where the tornado maybe remained in open farmland and didn’t cause as much damage, a lot of those tornado ratings can be determined based off of the video and pictures that we get rather than visiting the site directly,” Hagenhoff says, “especially if it didn’t strike a home or cause any injuries.”

The Johnston office of the Weather Service covers western and central Iowa, where Hagenhoff says “at least a dozen” tornadoes were reported. Of those, one is standing out. “Based off of video and pictures that we’ve seen, the Lake City tornado in Calhoun County appears to be the largest one,” Hagenhoff says. “Sometimes, the ones that are visually the largest may not actually be the strongest, but right now it looks like they’ve got the damage and just the size we’ve seen in pictures.”

Here in north-central Iowa between 5:40 and 6:15 last night, tornadoes were reported near Charles City, Rudd, Floyd, Nora Springs and Rockwell.