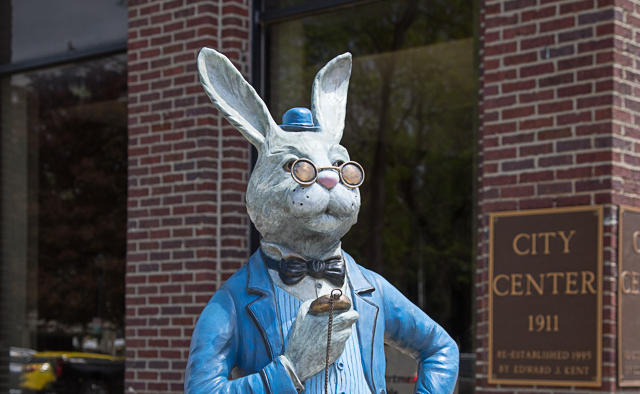 MASON CITY — The “People’s Choice” winner has been announced for the 10th annual River City Sculptures on Parade exhibit.

Robin Anderson announced the winner at Tuesday night’s meeting of the City Council in Mason City.  “The winner was sort of this whimsical Alice in Wonderland-style rabbit that is named ‘No Time to Say Hello, Goodbye’. The proposed placement for that is in the library yard, and the Library Foundation made a contribution of $1000 to purchase the pedestal that he will be seated on.”

The sculpture is the creation of artist Kimber Fiebiger of Minneapolis.

With Anderson soon retiring from her job as the CEO of the Mason City Chamber of Commerce, the Mason City Public Library and its director Mary Markwalter will be taking over the Sculptures on Parade program.   “We approached the Art Museum, and their board didn’t feel like it was a good fit for them, but thankfully the Library Board of Trustees very enthusiastically answered the call. So the sculpture program going forward will have its home at the Public Library with Mary leading things. She’s served on our committee for the past year and has been a big part of that.”

Markwalter says the Public Library is looking forward to taking over the program.  “It’s an honor for the library to be able to take this on, we’re really pleased to do it. Robin has always been a big help to the library ever since I’ve been here in so many ways, and a good friend too. I’m really happy to take it on. It’s a really neat program. The library has certainly been a big recipient of the permanent sculptures, and a lot of the really great rotating ones. We really appreciate the opportunity to do that.”

According to an agreement with the artist, sculpture program and the city council, the city of Mason City will purchase the sculpture for $15,000 for permanent display on the sculpture walk.