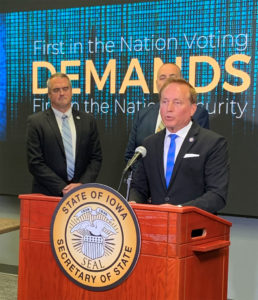 JOHNSTON — The state’s top election official says there’s “zero evidence” Iowa’s vote counting systems could be hacked or infiltrated. Secretary of State Paul Pate says every ballot is a paper ballot and none of the ballot tabulators poll workers will use next Tuesday are connected to the internet.

“And we have our unsung heroes, the bipartisan teams of poll workers — your friends and neighbors — that give us that transparency and consistency across all 99 counties, so that we can feel confident in our election process,” Pate said Thursday as he hosted a news conference with federal and state officials who are monitoring election-related threats.

Pate referred to a situation in Arizona, where armed people were observing voters putting their absentee ballots at drop boxes.

“Because of what people are seeing on the news and reports from other states, there’s something I’d like to address — voters we’ve got your back,” Pate said. “You will be able to cast your vote safely and if anyone tries to impede that process in any way, our friends in law enforcement will deal with them. We have these guys on speed dial.”

“In the past, I believe there was one report maybe out of western Iowa of a potential case of either a voter or poll worker intimidation and what we actually found out it was actually a false narrative being spread on social media to discourage people from going to that particular polling place,” Bayens said, “and so, in reality, there was no truth to it.”

About 10,000 Iowans will be working at precinct sites around the state next Tuesday and Pate is urging voters to treat them with respect.

“It’s a very important job they’re doing because they care about elections,” Pate said. “These are your friends and neighbors, the people you go to church with, the people whose kids and grandkids go to the same schools as your kids and grandkids. Our election officials are made up of bipartisan teams in every polling place and they deserve a lot of credit for the job that they’re doing.”

The day after the election, Pate will order a hand count of ballots cast in a randomly selected precinct in each Iowa county. Two statewide races will be identified as the subject of the recounts. Pate said these post-election audits in the past have clearly shown Iowans that the vote tallies announced on Election Night are accurate.

“Come election day when we put those tallies up, we need them to believe in it,” Pate said. “They can’t have a doubt because if they do, our republic has fallen and with that, whether it’s the Chinese or the Russians or the North Koreans, they just won the war without firing a single bullet.”

Pate hosted Thursday’s news conference in the State of Iowa’s Emergency Operations Center. State officials will gather there next Tuesday to monitor and respond to any election-related threats.