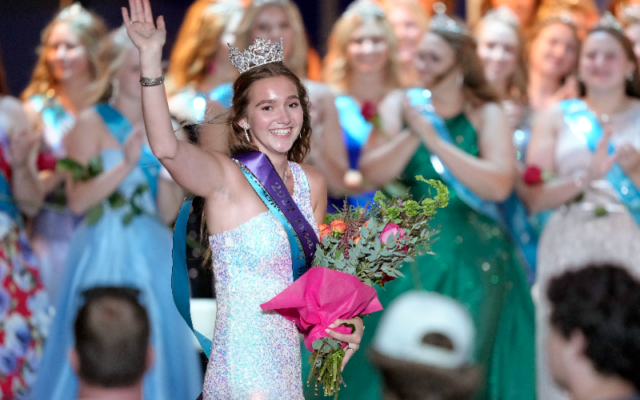 DES MOINES — August has been a busy month for an 18-year-old from north-central Iowa who is the 2022 Iowa State Fair Queen.

Mary Ann Fox of Osage was crowned the queen of the Mitchell County Fair on August 3rd and 10 days later she won this year’s State Fair Queen contest.  “It was quick, it was exciting and I like to say that it didn’t give me a chance to get my nerves running. I just got thrown into it,” Fox says, with a laugh.

She does not consider herself a pageant person.  “Not at all!” she says. “This definitely wasn’t anything that I had specifically wanted to accomplish.. I was just here to promote my county and promote my background and promote agriculture.”

Fox graduated from Osage High School this spring. As state fair queen, she has been awarded $8000 in scholarship money. “Starting on Monday, I will be a freshman at Iowa State University,” Fox says, “and I will be majoring in ag engineering.”

Fox was recently elected as a regional officer in the Future Farmers of America officer. Her dad raises corn and cattle.  “I like to say that my future plans within the 10 or so years are to find an answer to a problem going on in agriculture and just to make farmers like my dad — make their lives easier,” Fox says. “…I love looking out at a field of corn, so I just hope to end up there again.”

The job of State Fair Queen means Fox is spending a fair amount of time in the livestock rings, handing out ribbons to exhibitors showing all sorts of animals. “I’ve had some people tell me to be careful so one of them doesn’t step on my foot,” Fox says, ” but I know my way around the animals and I’m just there to see the smiles on the 4-H and FFA members’ faces as I hand them their purple ribbon.”

Fox has attended the state fair all her life, but has never been an exhibitor. Fox was crowned State Fair Queen last Saturday night and she says there was a bit of a mad dash  soon after. “Growing up on the farm, I have three times as many jeans as dresses, so I definitely had to go shopping for dresses on Sunday morning,” Fox says, with a laugh. “Since then I’ve loved just being able to be at the Fair every single day and being able to watch the sun rise in the morning and the sun set at night. I just love it here.”

The final day of the 2022 Iowa State Fair is Sunday, but Fox will continue in her role through the opening weekend of the 2023 State Fair. She’s planning to visit as many county fairs and events next summer as she can.