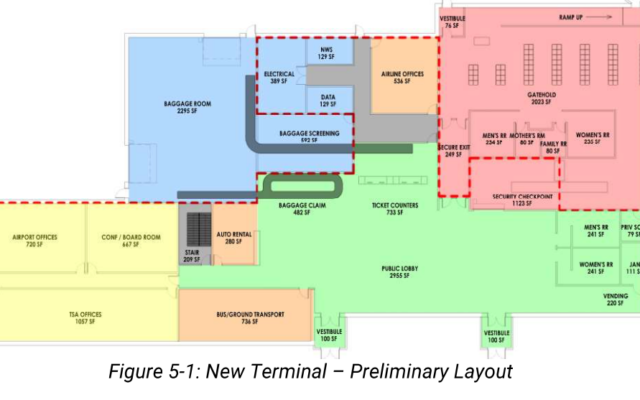 MASON CITY — An open house was held last night at the Mason City Municipal Airport to inform the public about the options being considered for the future terminal modernization plan.

Airport manager David Sims says the Airport Commission looked at two different options, one where the current terminal building that was built in 1965 would be renovated and expanded, with the other being the construction of a whole new terminal. He says the recommendation on the table currently is to build new.  “As it came out, the cost difference between those two options was actually very similar. The most financial, responsible means that we found was to build a new building versus investing that same amount of money into a 60-year-old building and still having a 60-year-old building. Constructing a new building will be easier from an operations standpoint, it won’t disrupt the current passengers’ experience passing through the terminal with noise, construction, dust and inconvenience. That’s one of the factors we’re looking at as we go into this process.”

Sims says the commercial air operations of today have outgrown the current terminal building.  “This building was originally designed and constructed in the 1960s. We did not have the type of airline service we’re bringing in today. We did not have the security, safety, fire standards that we have today, and this building simply does not meet the current expectations of today’s traveler. The choice is to try to make this building work or to construct a new building.”

Sims says the Airport Commission will meet next week to make a preliminary decision on whether to construct new or add on to the existing building.  “On October 11th, the Airport Commission will be voting on their preferred alternative. That’s not to say that’s in stone and that it will be the ultimate decision, but we have to make a preferred alternative selection so we can continue with the environmental and historical processes.”

The majority of the project will be paid for with federal money.

Click on this link to take you to the airport’s web page dealing with the terminal modernization program.