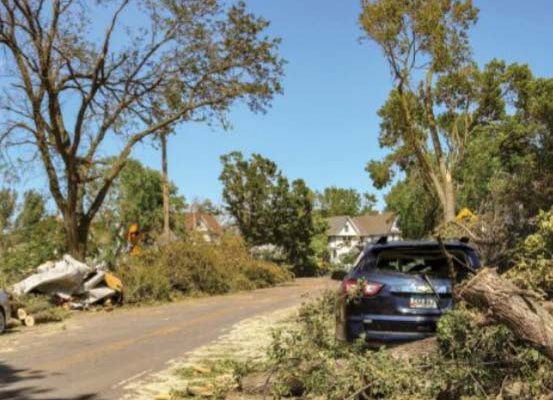 CEDAR RAPIDS — Debris is still being picked up from curbsides in Cedar Rapids more than five months after the derecho swept across the state. Iowa’s second-largest city was hit with the worst of the powerful storm’s 140-mile-an-hour winds.

Taylor Burgin, Cedar Rapids’ construction engineering program manager, says they’re starting to approach what should be the final pickups of nonorganic debris from the August 10th disaster. “Nonorganic debris would be anything from sheds, fences, anything exterior damaged during the storm,” Bergin says.

It may still be a few months before all of the tree debris is hauled away and turned into mulch. “We’ve got the majority of the debris off the ground. Right now, we’re actually removing trees that were damaged by the storm that are hazardous, so that’s generating most of the debris at this point,” Bergin says. “Probably towards the end of winter here we’re hoping to have the majority of the trees removed.”

There are several massive piles of tree debris on the outskirts of Cedar Rapids which could easily bury multiple football fields in trunks, limbs and branches. “To date, we’ve picked up over 3.1- approaching 3.2-million cubic yards which is enough to fill  basically any of the largest skyscrapers in the world,” Bergin says. “If you could actually take the debris that we have and stack it up, it would fit.”

A crew of about a hundred people is undertaking the task or removing the piles using a fleet of almost 50 trucks.
“They’ve been working sunup to sundown, seven days a week, outside of a couple of breaks for holidays since the storm hit,” Bergin says. “They’ve been putting in a lot of hours and a lot of effort.”

The city lost tens of thousands of trees in the storm and Bergin estimates it will be years before all of the debris is removed. Also, it will be decades before the community fully recovers its tree canopy, which was perhaps 65-percent destroyed. For some, he says the losses are heartbreaking.

“We understand the personal attachment to a lot of the trees that are out there,” Bergin says. “Unfortunately, some of them will have to come down. A lot of the residents have either planted the trees or watched the trees grow for sometimes their whole lives. A lot of people live in generational houses. Some of the phone calls I’ve had to take and the messages you have to deliver are really difficult.”

Marion-based Trees Forever, a non-profit organization dedicated to planting and protecting trees, plans to launch a massive campaign this spring to restore thousands of trees that were lost. Project Hope will bring new life to Cedar Rapids as well as Hiawatha, Marshalltown and rural areas of Iowa.