One injured after Osage school bus slides off icy road 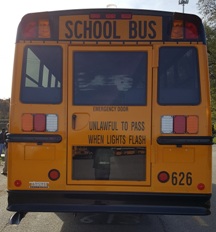 OSAGE — One child was injured after authorities say a school bus with ten students aboard went into a roadside ditch on an icy gravel road southwest of Osage Wednesday morning.

The Iowa State Patrol says a 10-year-old boy was taken to a hospital as a precaution after Wednesday morning’s accident. Authorities aren’t releasing the child’s name, but identified the bus driver as 58-year-old John Morische of Rudd.

The patrol says the bus was cresting a hill while traveling westbound on 316th Street west of Jersey Avenue when it slid off the wet, icy road. It hit a power pole, causing power lines to land on the bus.

The bus was evacuated and the students taken to school after officials confirmed that electricity to those lines had been cut off.

(The Associated Press contributed to this report)