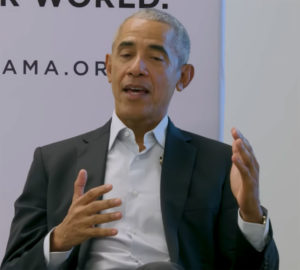 DES MOINES — Former President Barack Obama has posted a video online to mark the anniversary of his victory in the January 3rd, 2008 Caucuses. Most of the video centers around Obama’s meeting with six people who served as local organizers around the state.

“I really rode the wave of your work and that ultimately led to an historic election,” Obama said in the video.

Obama reminded the group that most national polls in 2007 showed him trailing Hillary Clinton.

Ann Dailey, who started as an unpaid intern on Obama’s 2008 campaign, was among the six Obama08 organizers featured in the video.

“One of the many mantras we heard about during the campaign was: ‘It’s not about you,’”  she said, drawing a “yes” from Obama before she continued, “which is not to say that the campaign didn’t care about us. It’s more to say that we are here as individuals to support something that is bigger than ourselves.”

Obama won the Iowa Caucuses 15 years ago Tuesday night, getting about 37 percent support in the delegate count that evening.