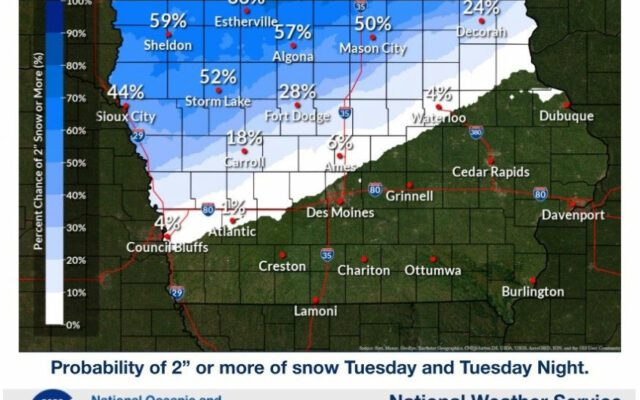 JOHNSTON — Forecasters say wintery weather will return to Iowa’s northwestern half on Tuesday and it’ll mean slow-going for traffic with two-to-four inches of snow possible along with a light glazing of ice.

National Weather Service meteorologist Brad Small says a Winter Weather Advisory is posted from 6 A.M. to 6 P.M. Tuesday for seven counties in the far northwest corner of the state. “The snow will begin during the overnight hours early Tuesday morning and then continue for much of the day and mainly affect northwest and north-central Iowa, with even higher amounts farther north into Minnesota,” Small says. “Central Iowa will only see light snow amounts and southeast Iowa will see little or nothing.”

The pre-winter storm could have a significant impact on the roads and travel, Small says, especially for areas like Estherville and Algona, where snowfall may be the heaviest. “We’ll see brisk northwest winds, gusting 20 to 30 miles per hour, so the flow won’t be too dry and fluffy but when you get those winds coupled with existing snowfall there, there could be some low visibilities and blowing snow,” Small says. “There could also be a period of freezing drizzle with the snow, too, as it goes in and out, so we can see a light glazing potential but the main threat is going to be the snow.”

The snowfall is expected to taper off along a line of cities that includes Council Bluffs, Atlantic, Ames and Waterloo. The snow that falls will likely be sticking around for a while, as bitter cold weather will come behind the storm front. “After the snow diminishes and ends Tuesday night, we will be dry Wednesday and Thursday but that will also be accompanied with much colder temperatures,” Small says. “Lows Wednesday night will be in the single digits and teens across the state, and with those brisk northwest winds, we’ll see wind chills below zero for periods from Wednesday into Thursday across northern Iowa.”

Find out about the latest road conditions by calling 5-1-1 or log on to the Iowa DOT’s travel information website 511ia.org.