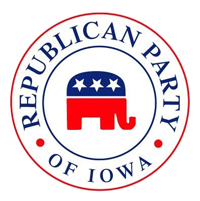 “There are a lot of reasons why I love Iowa, but maybe the biggest reason is Iowa loves to elect bad ass Republican women,” Nikki Haley said to kick off her keynote speech.

Haley, a potential 2024 Republican presidential candidate, resigned as South Carolina’s governor to serve as President Trump’s first United Nations Ambassador. Haley drew cheers with her criticism of President Biden’s foreign policy and his domestic agenda and when she mentioned the former president’s plan to visit the US-Mexican border next week.

“Thank goodness for Donald Trump or we would never have gotten Kamala to the border,” Haley said. “…If this is how she handles a crisis, God helps us if she ever becomes president.”

On Thursday afternoon, Governor Kim Reynolds announced she was sending up to 30 state troopers to Texas and Arizona to help with border security for two weeks.

“Biden has failed America with the open border policy,” Reynolds said when she was on stage later in the evening. “…He owns this. He can stop it tomorrow. Because he’s not, states are stepping up across this country to say: ‘Enough is enough. They’re not doing what they should be doing…and we’re all paying a price because of it.’”

Earlier this year in an interview with Politico, Haley expressed disgust at the January 6 attack on the U-S Capitol and said Trump had gone down the wrong path in questioning the outcome of the 2020 election. Last night, Haley made no mention on those reservations, touted Trump’s “America First” approach to foreign affairs and praised Governor Reynolds for signing election law changes.

“Real reforms that make Iowa’s elections safer and more secure. Every state should follow Iowa’s lead and they should do it before 2022,” Haley said, to applause.

“I’m fine with Iowa being First in the Nation as long as you keep South Carolina First in the South Primary,” Haley said, adding: “You mess with us, we’ll mess with you,” and Kaufmann replied: “Message received.”

The annual spring fundraiser for the party was held as congress was in session, so the five Iowa Republicans serving in the U.S. House or Senate recorded video messages for the crowd. Senator Chuck Grassley, who has not yet announced whether he’ll seek reelection in 2022, said he’s visited 77 of Iowa’s 99 counties so far this year.

“I’m working as hard as ever for the people of Iowa,” Grassley said in the video.

His grandson Pat Grassley, the speaker of the Iowa House, spoke in person to the crowd a few minutes later.

“How many of you want to see Chuck Grassley reelected to the United States Senate?” Pat Grassley asked and the crowd reacted. “…I told him I’m going to be his number one cheerleader between now until his reelection.”

At the end of the evening, former Iowa Governor Terry Branstad scoffed at the idea Iowans would choose someone new rather than Grassley in 2022.

“The people of Iowa know that Chuck Grassley is the hardest working, most conscientious senator,” Branstad said, to loud cheers from the crowd.