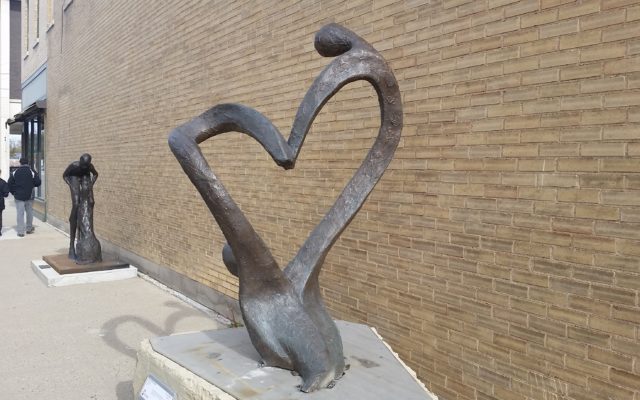 MASON CITY — The new River City Sculptures on Parade exhibit is being installed today in downtown Mason City. 21 artists with 54 sculptures are a part of this year’s exhibit along a nearly two-mile path that starts on West State Street in front of Principal Financial, winding its way through downtown and the Cultural Crescent area before finishing in Central Park.

One of the original six participants in the first exhibit has returned for the first time in seven years and says she’s happy to see how the program has flourished. Deb Zeller has her studio in Hopkins Minnesota and took some time off from sculpting after reconstructive foot surgery. She’s amazed to see how much the Sculptures on Parade has grown.  “I cannot believe how many sculptures are here now, how many are permanently here. It’s so heartwarming to artists to see a community come together like this and make it really thrive. I think this might be maybe the second largest sculpture on display that I know of anyway and it hasn’t been that many years so it’s incredible growth and progress.”

Zeller says exhibits like this adds vibrance to a community. “It’s so fun, this morning we’ve been just walking around, and people with their kids are out and they’re interacting with the sculptors, and that’s a win when the community is interacting.”

Zeller’s sculpture is on the side of the Brick Furniture building and it’s called Parental Love. She says it was originally commissioned for Oakland Cemetery in Hutchison Minnesota.  “It represents unfortunately a small child who is deceased and the parent, which is abstractly represented for this particular sculpture, and I usually do very representational art, but this one is abstracted so that the parent could be the dad or the mom you don’t know, it’s the parent. The arms are abstracted to be this fluid heart, because the parents’ heart is always going to be with that child. At the top of the heart is the small head of the child, looking back down at the love of that parent.”

Brochures detailing this year’s Sculptures on Parade exhibit are in the process of being printed and will be placed in racks in time for the North Iowa Band Festival on Memorial Day weekend.