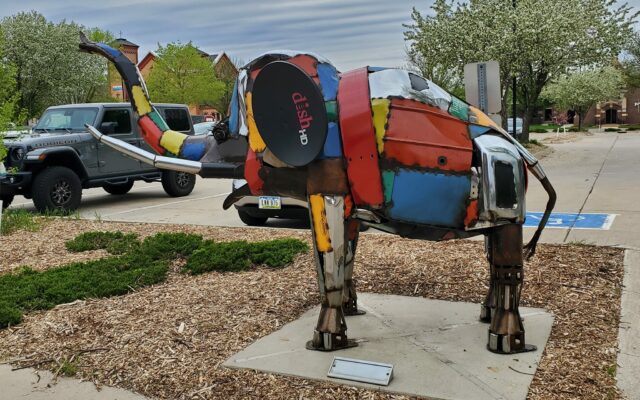 MASON CITY — The installation of the new River City Sculptures on Parade exhibit was completed today in downtown Mason City. The new exhibit features over 70 sculptures along a 1.7 mile walk that starts on East State Street and winds its way through the downtown area.

Robin Anderson with the Sculptures on Parade committee says the new sculptures along with some permanent additions to the display will be finalized by next week.  “We have all the rotating sculptures up, and next week we are going to be permanently installing some sculptures that will become a  part of the exhibit. In another week we should be ready to go.”

It’s the 10th year of the River City Sculptures on Parade program, and Anderson says  it has grown from five sculptures in the first year to 75 this year.   “It’s amazing, and already this morning, there are people are taking pictures with them and interacting with them, and I think that’s one of the best things about this exhibit is that it’s so available and people love it.”

The River City display is part of a partnership with SculptureOne which assists similar sculpture programs in Sioux Falls, Mankato, and Eau Claire. Anyone interested in purchasing or leasing a sculpture is encouraged to contact the Sculptures on Parade committee through the Mason City Chamber of Commerce.