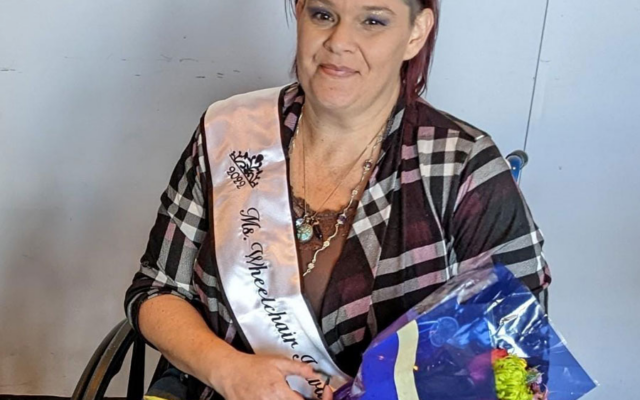 ANKENY — A central Iowa woman is the new Ms. Wheelchair Iowa. Kelly Richmond of Altoona was crowned at the competition last weekend.

The 42-year-old mother of four was born with spina bifida, a condition which impacts the spine, and she’s been using the wheelchair for mobility for about five years. Richmond says she likes to be approached and have people ask about the wheelchair and why she’s in it, and she’s hoping to lead by example with her new role.

“There’s so many kids and even adults that don’t have that opportunity or they’re too embarrassed or they’re not as secure in it as I am,” Richmond says. “It’s nice to be able to show them you can do this. You can be a family person, you can go to school, you can go to college, you can travel, you can experience everything you want. It just requires a little bit more adaptability.”

As Iowa’s new titleholder, Richmond will be traversing the state, speaking to civic groups, schools and government leaders about the abilities of people who have disabilities. She says she already likes to get out and meet people and see the sights.
“We go out and explore as often as we can as I just love gravel travel, so anywhere I can go,” Richmond says. “My fiance takes me all over Iowa to the less-seen places and I just get to experience openness which I never really did back home.”

A native of southern California, she left the West Coast several years ago and fell in love with Iowa — saying California is too crowded, too expensive and too much asphalt. Her children range in age from five to 20 years, and the 20-year-old is in the U.S. Army, preparing to deploy. Richmond says she’d like to make the Veterans Home in Marshalltown and Iowa’s VA hospitals among her first stops as Ms. Wheelchair Iowa.

“Veterans, especially some of the ones that are coming back with injuries and ending up in wheelchairs after having all of that freedom and mobility,” Richmond says, “going in and being able to show them that, I know this is a big setback for you, but you can still do everything you want to do as long as you have that mindset.”

Richmond works fulltime as a maintenance coordinator in the corporate offices of Casey’s General Stores in Ankeny. She’ll represent Iowa at the Ms. Wheelchair America event in Grand Rapids, Michigan, which begins in late August of 2023.