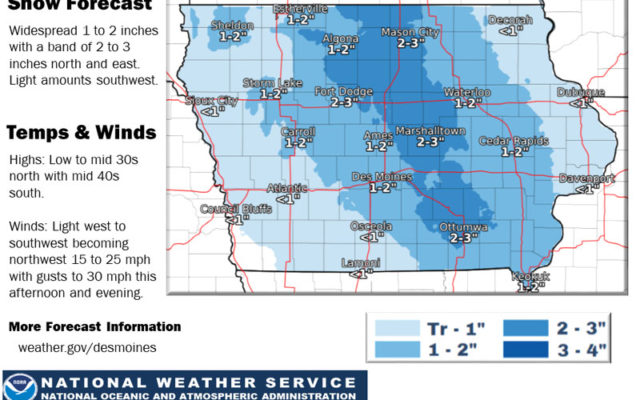 MASON CITY — Snowflakes are already flying in parts of northwest Iowa and by late this afternoon, much of the state should see at least a dusting of snow if not several new inches.

Meteorologist Allan Curtis, at the National Weather Service in metro Des Moines, says there should only be moderate accumulation in northwest Iowa this morning through mid-afternoon. “That’ll spread south and southeast across the state through the day,” Curtis says. “For better or worse, the greatest amounts of snow will probably be from roughly Estherville down through Waterloo and over towards Ottumwa, if people can follow that line.”

The first snowfall of 2020 will be far short of a blizzard but he predicts it will turn plenty of our lawns white. “We’re looking at a relatively widespread one to three inches in those areas,” Curtis says. “A few unfortunate souls may see a little bit more than that, but it should be a pretty much one-to-three-inch snowfall event through there.”

In central Iowa, Des Moines and Ames may only see a half-inch to an inch-and-a-half, though the snow will likely be falling during the afternoon rush hour. Davenport, too, may see up to an inch-and-a-half of snow, while the Iowa City-Cedar Rapids corridor may get two inches.

Curtis says whatever sticks, likely won’t last. “Even the snow that falls today is probably going to do a little bit of melting,” Curtis says. “We’re going to see highs into the mid 30s across a good section of the state, so it’ll be a heavier, wetter snow and by Sunday, we should see widespread 40s, so it’s not going to be around too long.”

After this storm passes, the long-range forecasts calls for little-to-no precipitation through next Thursday.