DES MOINES — A Republican-led committee issued a report Thursday afternoon, concluding legislators do not have the legal authority to open 29 ballots that could change the outcome of a northeast Iowa race.

Representative Michael Bergen, a Republican from Dorchester, was declared the winner over Democrat Kayla Koether by just 9 votes. 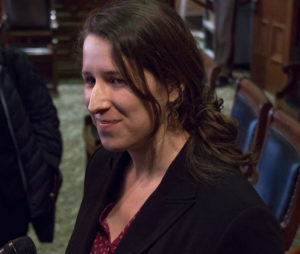 The Postal Service confirmed the 29 unopened absentee ballots were mailed by the deadline, but Republicans say the bar codes used to check the mailing dates are not legally recognized by Iowa election rules.

Koether was in the committee room for Thursday’s discussion. “I’ve been appalled by a process that not only disenfranchised these voters the first time, but refused to hear their voices the second time,” Koether told reporters after the meeting.

Koether filed a challenge in December, asking the Iowa House to open the uncounted absentee ballots and re-do the final tally in her race against Bergen.

“I expected that this process would be conducted in good faith, so to not hear witnesses, to not hear from the people that were directly impacted by this I think is really a disservice to this process,” Koether said, “and it will really leave the voters in my district really questioning this process.”

The matter now goes before the full House for a vote on Monday afternoon, but Representative Bergen said it’s a conflict of interest for him to vote.

“It’s probably prudent for me just to not have comment on the situation,” Bergen said during an interview with KDEC radio last week. “It is for the other 99 members to decide.”

Koether has indicated a lawsuit is likely if the House votes to keep the ballots sealed.