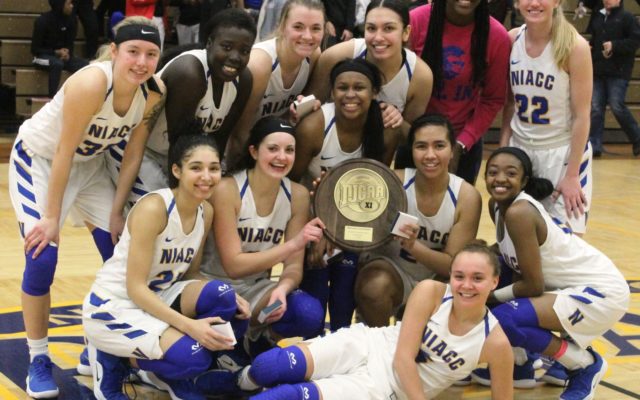 MASON CITY — The NIACC women are headed back to the national tournament. The second-ranked Lady Trojans outlasted fourth-ranked Kirkwood 77-70 on Sunday to claim the Region XI championship and earn their ninth national tournament appearance, in a game you heard on AM-1300 KGLO. NIACC coach Todd Chichetto says the game lived up to the billing of being a hard-fought challenge for both squads.

All-tournament team captain and conference player of the year Mandy Willems scored 16 points, Jada Buford had 15 while Autam Mendez added 14 to lead the Lady Trojans. Those three as well as Kelcie Hale made the Region XI all-tournament team.

Chichetto says he’s proud of how his team, which is all freshmen except for one player, grew during the second half of the season

Chichetto was named the conference coach of the year. NIACC will play next week in the Division II national tournament starting on March 19th in Harrison Arkansas.

CEDAR RAPIDS – 7th-ranked NIACC dropped an 84-72 decision to Kirkwood in the Region XI men’s title game on Saturday afternoon, as you heard on KGLO.

NIACC, which was playing in the regional title game for the first time since 1995, placed Hardrict and Sampson on the regional all-tournament team. The Trojans’ Mark Mohl was selected as the regional coach of the year.

INDIANAPOLIS (AP) — Megan Gustafson scored 45 points Sunday to lead No. 10 Iowa past No. 8 Maryland 90-76 for its first Big Ten Tournament title since 2001. It’s the longest gap between conference crowns since the tourney became an annual event in 1995, and the Hawkeyes claimed the league’s automatic NCAA Tournament bid with a victory over the Big Ten’s regular-season champion. Kaila Charles scored a career-high 36 point for the Terrapins. Mason City native Makenzie Meyer played 37 minutes in Sunday’s game, scoring seven points and handing out five assists.

OKLAHOMA CITY (AP) — Alexa Middleton scored 24 points, Bridget Carleton and Ashley Joens had double-doubles and No. 19 Iowa State took control down the stretch to defeat No. 21 Texas 75-69 in the Big 12 Tournament semifinals. The second-seeded Cyclones, winners of five straight, will face No. 1 Baylor in their first championship game appearance since 2013.

LINCOLN, Neb. (AP) — Amir Harris scored the go-ahead layup with 10.8 seconds left and Thorir Thorbjarnarson blocked Jordan Bohanon’s 3-point try at the buzzer as Nebraska came back from a nine-point deficit in the last minute of regulation to beat Iowa 93-91 in overtime. The win might have served as an emotional sendoff for Cornhuskers’ coach Tim Miles, whose future at Nebraska is in serious doubt after his team’s free fall the second half of the season. Iowa lost its fourth straight.

ST. LOUIS (AP) — Bradley rallied from an 18-point deficit in the second half and earned its first NCAA Tournament berth since 2006, beating Northern Iowa 57-54 in the Missouri Valley Conference championship game. Elijah Childs scored 16 points for fifth-seeded Bradley. The Braves trailed 35-17 with 17 minutes left. They advanced to the NCAA Tournament for the ninth time overall — in their last appearance, as a 13th seed, they beat Kansas and Pittsburgh before losing to Memphis.