FORT DODGE — Central Springs on Friday afternoon wrapped up third place in the Class 2A state softball tournament with a 9-3 win over Top of Iowa Conference rival North Union, as you heard on AM-1300 KGLO and kgloam.com. Lizzy Hamand was 3-for-4 with three runs batted in while Carly Ryan also added two runs batted in to lead the Panthers. Cooper Klaahsen started in the circle but left the game due to illness in the third inning, allowing senior Kaylea Fessler to pitch the final four-and-two-thirds innings, striking out eight to pick up the win. Central Springs ends with a record of 33-2. The team that beat the Panthers in the semifinal round, Regina of Iowa City, took home the Class 2A title with a 6-4 win over Wilton. Aurora Stepleton and Abby Pate from Central Springs were named to the Class 2A all-tournament team.

FORT DODGE — other results from Friday at state softball tournament

MASON CITY — Three area graduates have been named to play in this weekend’s Iowa High School Baseball Coaches Association All-Star Series at Roosevelt Field in Mason City. Mason City High teammates Cooper Wiemann and Carter Thomas will play on the Large Schools West squad, while Clear Lake’s Jett Neuberger will play on the Small Schools East team. Tyler Downing of Charles City has been named as an assistant coach for the Large Schools East team. You can listen to this weekend’s games on AM-1300 KGLO.

Click on the pictures below to pull up each full roster 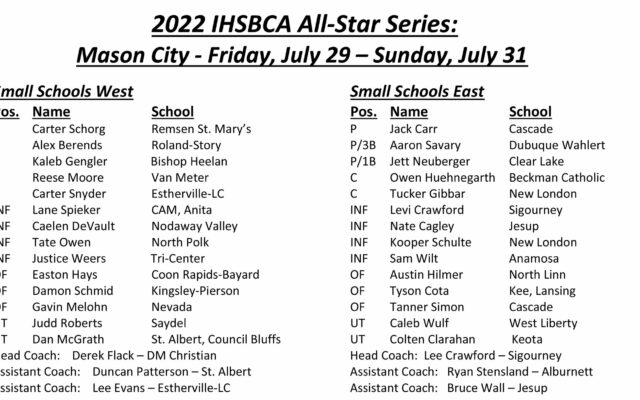 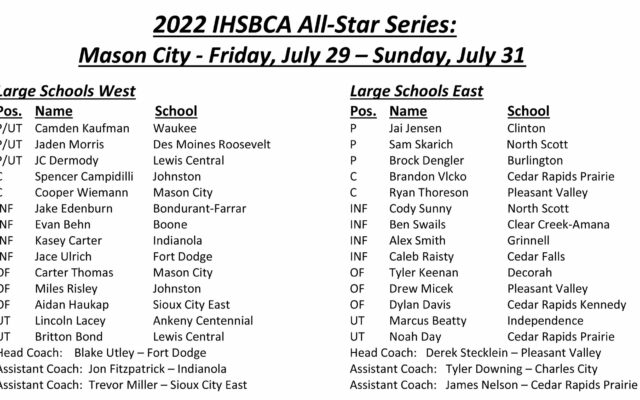 DETROIT (AP) — Sonny Gray allowed two hits in six innings to lead the Minnesota Twins to an 9-1 win over the Detroit Tigers. Gray is 2-0 against the Tigers this season, allowing one run on six hits in 13 innings. Jose Miranda had three hits and scored twice for the Twins, who started their post-All-Star Game portion of the schedule sweeping the Tigers in a two-game series. The Tigers have lost three straight and 11 of 13. Rony Garcia allowed three runs on three hits and three hit batters in 2 2/3 innings before leaving with shoulder soreness.

EAGAN, Minn. (AP) — The Minnesota Vikings signed rookies Andrew Booth Jr. and Ed Ingram to complete their draft-class contracts as players began to report to training camp. Booth, a cornerback, was a second-round pick out of Clemson, 42nd overall. Ingram, a guard, was a second-round selection out of LSU, 59th overall. The Vikings signed their eight other draft picks earlier this summer. The Vikings announced 31 players who reported to team headquarters. The first wave included all rookies, some inexperienced returners, some players recovering from injuries and all three quarterbacks on the roster.

NEWTON, Iowa (AP) — Josef Newgarden collapsed in the motorhome lot following his late crash Sunday at Iowa Speedway and was taken to a Des Moines hospital by helicopter for evaluation. Team Penske said he’d be held overnight. IndyCar medical director Dr. Geoffrey Billows said Newgarden was awake and alert. Newgarden dominated and led 148 of the 300 laps while trying to sweep the doubleheader weekend. But something on his Team Penske car broke with 64 laps remaining and spun hard into the outside wall — creating an opening for Pato O’Ward of Arrow McLaren SP to win the race.

IOWA CITY — Iowa linebacker Jestin Jacobs says the Hawkeye defense does not feel pressure to carry the team. The defense traditionally is ranked at or near the top of the Big Ten and last season intercepted a league-high 25 passes.

Jacobs is coming off a sophomore season in which he totaled 53 tackles and also showed he can be effective in pass coverage.