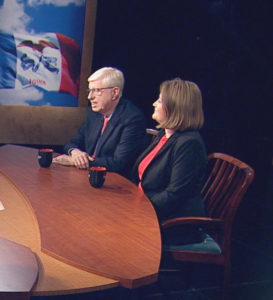 “I’m 100% prolife and it would be my job as attorney general to defend the law that the legislature would pass,” Bird says.

Bird is criticizing Miller for choosing not to have his office defend the state when Planned Parenthood sued to block the six week abortion ban Republican lawmakers adopted in 2018.

“But in 2021, he defended the waiting period for abortion law until he changed his mind partway through and decided not to defend it anymore,” Bird says. “When I’m attorney general I will do my job and defend the law.”

Miller says he did “the ethnical thing” by having private attorneys rather than the attorney general’s office defend abortion restrictions the Republican legislature and governor had adopted.

“I’ve represented the state in many ways in cases where I generally disagreed with the policy,” Miller says, “but twice I got to the situation where I thought that given the situation that I couldn’t zealously represent the state — two times out of 40 years — and so I stepped aside.”

Miller says he’s opposed to “extreme” abortion policies. “A lot of women feel incredible threats in terms of their liberty and in terms of the freedom to take care of their own medical conditions,” Miller says, “and I support them in that.”

Miller and Bird made their comments during taping of “Iowa Press” which aired over the weekend on Iowa PBS. Governor Reynolds has asked a district court to lift its injunction which has prevented the six-week abortion ban she approved from taking effect.