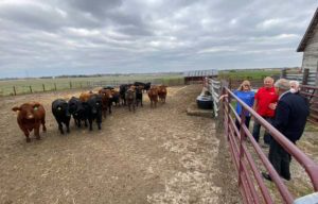 Vilsack toured farms and research sites in Iowa with Mexico’s top agriculture official on Wednesday.  “I was certainly pleased to hear from the secretary an understanding that while there may be decisions made in Mexico not to cultivate G.E. corn, it doesn’t limit the ability of Mexico to import G.E. corn,” Vilsack told reporters.

More than 90% of U.S. corn is genetically modified. Mexico is phasing out genetically modified crops for human consumption by 2024, but Vilsack said the country doesn’t grow enough corn for the one billion tortillas consumed in Mexico each day. “I certainly appreciate the fact that our corn still has a market opportunity in Mexico, which I think is important,” Vilsack said. “…There are still some other issues we have to work through and we’re going to continue to work on those.”

Vilsack told reporters the two countries are both taking steps to guard against African Swine Fever which could decimate the pork industry if it reaches this continent.

Vilsack’s agency will soon start looking into the consolidation of the seed industry. President Biden issued an executive order in July asking federal agencies to examine the consolidation of meatpackers, seed companies, and other ag industries.  Vilsack said his agency’s initial focus has been on food processing, which is dominated by a handful of companies, but an examination of the seed industry is ahead.

“The president’s executive order also mentions the need for us to take a look at the patent laws,” Vilsack said, “and that would be a place to start.”

Vilsack and Mexico’s secretary of agriculture and rural development were also in Des Moines for World Food Prize events Thursday.