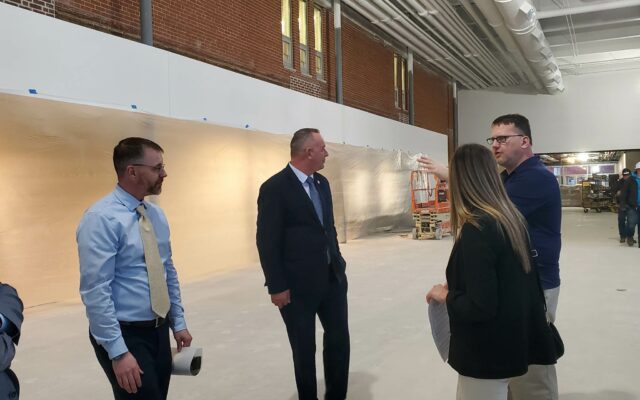 MASON CITY — The mayor of the municipality of Decan in Kosovo visited Mason City on Tuesday as part of their city’s tour of Iowa. Decan is a municipality of about 40,000 in the eastern part of Kosovo, and Mason City is considering establishing a sister city relationship with the community.

Mayor Bashkim Ramosaj  was joined by his chief of cabinet Manjolla Shala  and the Chief of Mission of the Kosovo Consulate in Des Moines Artan Duraku. Ramosaj tells KGLO News that he enjoyed meeting great people and looks forward to working on establishing a sister city relationship.  “Great people, great hospitality. You can share the history of your city with people here, they listen. We also talked about the cooperation we’re going to have in the future, the partnership, but we think that this partnership is going to go well.”

Ramosaj and his delegation toured several parts of the city, with one of their last stops being at Mason City High School before attending last night’s city council meeting.  “We’ve seen a lot of good things. First of all, this school that we are at right now, it’s very perfect for the students. We also saw the renovations that happened at the hotel. That’s a good thing to help with tourism in this city. We also saw the infrastructure and the construction here, and a lot of other great things that happened here.”

Ramosaj says he hopes a Mason City delegation can come to Decan in the future.  “I’m amazed by the city, by the people of this city, their hospitality, of the mayor of the city. We hope that they come and visit us in Kosovo.”

Among the other stops made by the delegation included the Multi-Purpose Arena, Music Man Square, Curries, Kraft, Masonite, and North Iowa Area Community College.