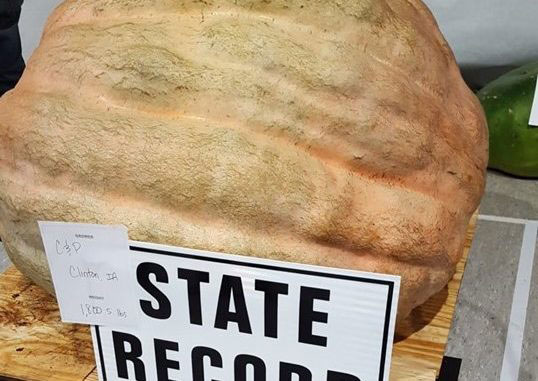 ANAMOSA — A new “great pumpkin” for Iowa was crowned at the Anamosa Pumpkinfest over the weekend.

People from all over bring their giant pumpkins to Pumpkinfest every year for the Ryan Norlin Giant Pumpkin Weigh-off, and this year, there was a new state record for Iowa’s largest pumpkin. The winning pumpkin weighed in at 1,800.5 pounds. The gigantic gourd was entered by Dan Carlson and Marc Petersen from Clinton who won four thousand dollars for their first place pumpkin.

Organizer Nancy Norlin says the pumpkins today are much bigger than they were when the event started in memory of her son 30 years ago. “Exponentially, they’ve increased even more than exponentially,” Norlin says, laughing. “It’s all because of genetics and a lot of science. They really put a lot of work into it.”

This year’s winner beat the previous state record of 1,662 pounds, which was set in 2007 by Don Young of Des Moines.