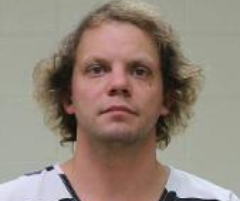 MASON CITY — A Mason City man accused of drug and gun charges has pleaded not guilty.

A criminal complaint states that late on the night of October 19th, 32-year-old Spencer Graves was driving in the 900 block of 16th Northeast. A person saw Graves driving at a high rate of speed and yelled at him to slow down. The person walked back inside his house then walked back out the rear door when he saw Graves standing on his property. The resident asked Graves to leave his property but Graves refused, with Graves later saying that he had a loaded firearm pointed at him. The victim saw the gun in Graves’ hand and immediately called 9-1-1.

Graves was later stopped near the intersection of 14th and North Hampshire, with officers saying they found a loaded rifle, a loaded CO2 gun, additional ammunition, and 13 grams of methamphetamine in the vehicle.

Graves was charged with a Class B-level controlled substance violation, intimidation with a dangerous weapon with the intent to injure or provoke fear, having a used or expired drug tax stamp, operating while intoxicated and possession of meth first offense.

He filed a written plea of not guilty in Cerro Gordo County District Court on Tuesday. Court records did not immediately state a start date for his trial.