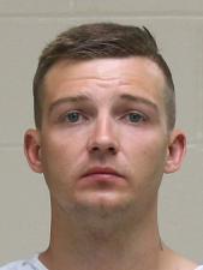 MASON CITY — A Mason City man accused of robbery in two separate cases has been sentenced to prison time.

27-year-old Johnny Hovenga along with 43-year-old Dalles Dodge were accused of forcing their way into a Mason City apartment in the 400 block of East State on the night of January 29th, with a resident being allegedly assaulted by Hovenga while Dodge took items from the residence.

Both men were charged with second-degree robbery, a Class C felony, but Hovenga in August pleaded guilty to a charge of third-degree burglary, an aggravated misdemeanor. Hovenga was sentenced on Monday by District Associate Judge Karen Salic up to five years in prison and was fined $1025.

Dodge has pleaded not guilty in the case and is scheduled to have a jury trial on December 14th.

Hovenga was also accused of third-degree burglary for a June 14th incident in which he allegedly broke out a window to enter a detached garage and kicked in a door to a house in the 12000 block of 160th Street in Cerro Gordo County. He also is accused of entering a truck parked on the property with the intent to commit theft.

Hovenga in August pleaded guilty to a charge of trespassing, a serious misdemeanor, and was sentenced on Monday to 30 days in jail and was ordered to pay $1534 in restitution to the victim.