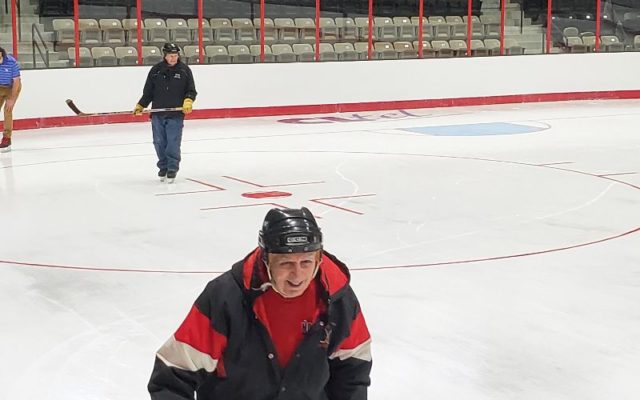 MASON CITY — While the ribbon cutting ceremony takes place later this morning for the new multi-purpose arena in downtown Mason City, a milestone took place yesterday with the first skate on the ice for the arena.

For years at the North Iowa Ice Arena, Mohawk Hockey Coach and arena manager John Lloyd would always have the honor of being the first person out on the ice. Coach Lloyd had the first skate honors yesterday at the new arena and invited Ron Hanna, one of the founders of the Mason City Youth Hockey program, to join him.  Lloyd says, “It’s exciting because that way now I know now we’re getting ready to go. When I took that first skate, I asked Ron to go with me this year. That was special alone.” Hanna says he was honored to be asked by Lloyd to do that.”

Lloyd says one of the big differences between the old and new arenas is the amount of locker room space available.   “Locker room space is nice. The high school team has got a larger locker room, but I think we can even get the visiting team into one locker room instead of giving them two. When we have youth tournaments, we’ve got eight locker rooms that we can use for youth hockey tournaments.”

The grand opening ceremony takes place at 10 o’clock this morning at the arena, which is on the west side of Southbridge Mall.