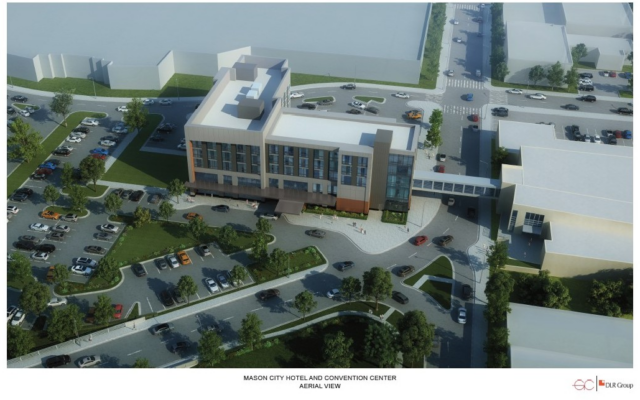 MASON CITY — Mason City’s city administrator says progress on the hotel and convention center portion of the River City Renaissance project can ramp up immediately if the City Council tonight approves a development agreement for the project. City officials have finalized a development agreement with Gatehouse Mason City LLC for the construction of a hotel that would fulfill the private investment portion of the $39 million project being supported through the Iowa Reinvestment Act.

City Administrator Aaron Burnett says approval of the agreement will kick off that project full-steam.  “Once we approve that agreement, Gatehouse can move forward with their design and their financing. We can continue to work on the site to make sure that it’s prepared for them to be able to start construction as soon as possible. All of these things are big developments and they are things that get us closer to finalizing the Reinvestment District and being able to capture those state dollars to make sure that we’re financing this through all the different means that we’ve set out over the years.”

Burnett says a lot of hard work from both parties went into figuring out the final details of the development agreement.  “This is a very complex project. When you look at all the different components, whether it’s the reinvestment district from the state, the ability to capture those revenues is extremely important, and it’s also important for the developer to make sure that that they have that confidence that the city’s going to come through and follow the plan is as laid out. Every single phrase, every single item in that development agreement was scrutinized by both parties, by their lawyers, in making sure that we’ve set a good plan to move forward. Now that that’s in place, now that we have that agreement work from, I think that things will move very quickly, because we’ve had these very thoughtful discussions ahead of time.”

After the initial approval of the development agreement, state law mandated that the city had to wait 30 days for any competitive proposals to be submitted and considered for the project. A public hearing will be held prior to the council considering approval of the development agreement. The council meets tonight at 7 o’clock in the Mason City Room of the Public Library.