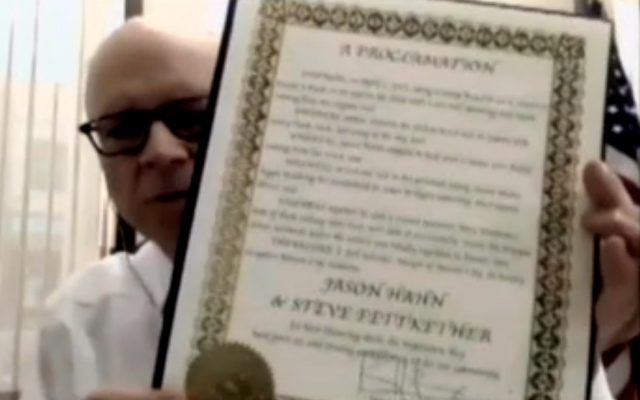 MASON CITY — The City Council in Mason City last night honored two men who were credited with saving the life of a woman by pulling her from a burning vehicle earlier this month.

Donna Rench was driving eastbound on County Road B-20 just west of Mallard Avenue on the morning of April 5th when her vehicle left the road after presumably trying to avoid hitting deer and landed in a ditch. The truck hit an embankment on a driveway, rolled over into the ditch and landed on the passenger side. Jason Hahn was driving westbound and spotted Rench’s truck with smoke coming out of the engine. He eventually had to break out the windshield with a shovel, and with the help of another motorist, Steve Fetketther, got Rench out of the vehicle before flames fully engulfed it.

Mayor Bill Schickel read a proclamation at the start of the meeting.  “Now therefore, I, Bill Schickel, mayor of Mason City, do hereby recognize Jason Hahn and Steve Fetketther for their lifesaving deeds, the inspiration they have given us, and the shining example they have set for our community.”

Hahn and Fetketther were not in attendance at last night’s meeting as they were in Des Moines preparing to receive a similar honor from Governor Kim Reynolds today.