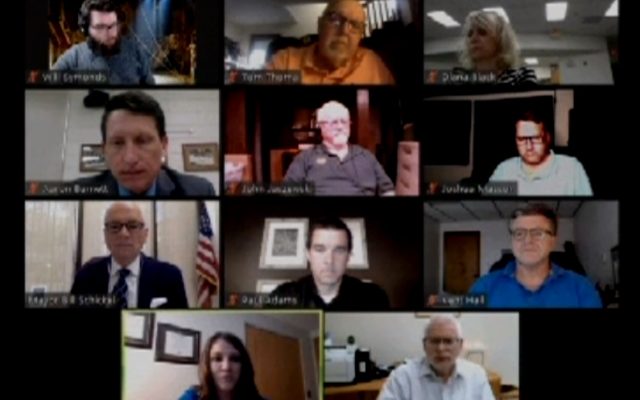 MASON CITY — While the redevelopment of Southbridge Mall has been making headlines in Mason City for weeks, another commercial building on the city’s south side is being earmarked for being repurposed as well.

The City Council in Mason City this week approved a modification of the city’s zoning laws to allow the old Sears store space in the Southport shopping center to be transformed into an indoor, climate controlled self storage facility.

Kent Hall would manage the facility for Rochester Minnesota-based Midwest Indoor Storage, which would use 55,000 square feet of the building for that function. The previous maximum allowed in the zoning ordinance was 34,999 square feet.  “We’re trying to purpose that for indoor, climate controlled storage. It seems to be a good fit for the style of the building with the height of the ceiling. The location is not perfect, but it’s about as good as we’re going to get in this city.”

Hall says there’s a demand for indoor storage facilities like this.   “There will be quite a number of storage spaces, anywhere from a 5×5 to a 10×20, and possibly slightly larger than that. In each case in the cities they’ve gone into, there have been outdoor storage like we have all over Mason City, and this kind of storage has been in demand almost immediately because people want to keep their stuff where the humidity is controlled, where the heat and the air conditioning keeps that at a constant temperature year round, and that’s the key to this opportunity.”

The council approved modifying the zoning ordinance on the first reading, and then waived the final two readings of the ordinance so it could go into effect right away. Hall requested the waiving of the final two readings due to potential cost hikes in the project if they had to wait until the council’s first meeting in July for final approval.   “The price of the roll-up doors that we have to buy 250 of goes up approximately 10% per month, which means we get two more increases before we could even order the things. That actually does make a pretty big dollar difference to us.”

The council needed a super-majority of five votes to approve all three readings of the zoning change at once, with the council unanimously approving.

Currently the old Sears location is being used as a mass COVID-19 vaccination clinic by the Cerro Gordo County Department of Public Health. Health director Brian Hanft this week said they would stop having clinics in the building next week and be out of the location by the end of the month.