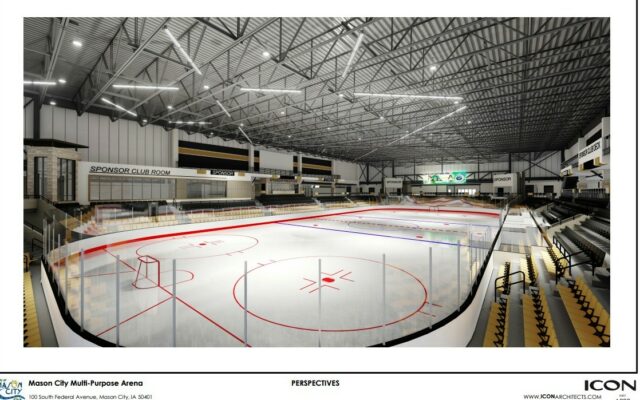 MASON CITY — The City Council in Mason City this week approved the third bid package for the multi-purpose arena being constructed as part of the River City Renaissance project.

That bid package includes things like the interior fit-up, mechanical, electrical, exterior improvements and elevators. Two bids were received for this package, with Dean Snyder Construction of Clear Lake’s bid of $7,135,000 being recommended for approval.

Kyle Kvamme of ICON Architectural Group of Grand Forks North Dakota, the company working with the city on constructing the center, says the project is moving along and is still targeted for a November completion. “We’re happy to announce that we are on track budget-wise and schedule-wise, and we’re still sitting very comfortably with our contingency. With bid package three approved, we will be 99% out to bid done, so we’re really confident that we’re sitting in a great spot. We’re out of the ground as it had been said earlier, so a lot of those issues hopefully we won’t have to worry about things like that anymore.”

The council also approved a change order that’s part of the arena project. City Administrator Aaron Burnett says the elevation of the rock on the arena site was slightly higher and more removal of rock was required to achieve the proper depth for the arena floor. He says rock was known to be an issue and the design was modified once early in the process to go higher rather than deeper in the ground due to that issue. Burnett says modifications by ICON have kept the cost to $152,530 rather than having to experience higher potential costs for rock removal.