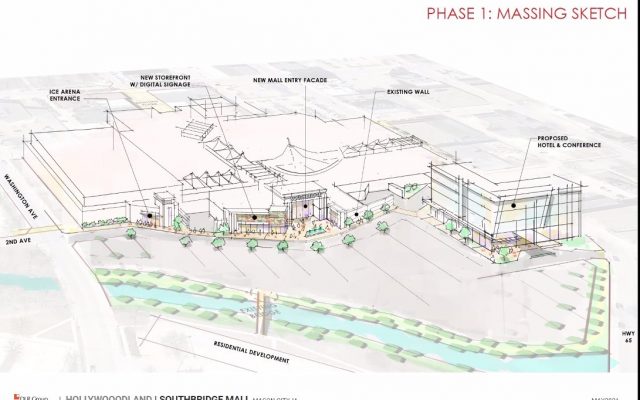 Latest drawing of what a redeveloped Southbridge Mall would look like

MASON CITY — The City Council in Mason City Tuesday night approved a development agreement between the city and the development group that plans to transform Southbridge Mall from a mainly retail facility to one geared toward family entertainment.

OZ Hotels and Resorts, headed by David Rachie, who is also spearheading the Hyatt Place Hotel that will be constructed in the eastern part of the mall parking lot that is part of the River City Renaissance Project, announced last month that the investment group was purchasing the mall and repurposing it with new retail stores, several restaurants, bars and recreational businesses.

Rachie says with future tenants signing letters of intent to be in the mall, they’re actually starting to run out of space.  “The one thing that we’re finding very quickly is that we’re running out of space. We’re very likely at almost 100% occupancy, and maybe at 100% occupancy day one. We’ve gotten extra space by narrowing some of the halls a little bit, but not too much, it will still feel like a street scene, and that’s really what we’re going for in terms of the interior.”

Rachie says if they do get to 100% occupancy, a “phase two” project would expand the mall and connect it to the hotel. “We started working with the city about a phase two which really starts tying in the hotel and the mall much closer together, jetting it out so it’s on the same level as the hotel, so it’s much easier to go from the hotel right into the restaurants. These would all most likely be food and beverage outlets in the expansion. We’d also put a canopy over the new entryway to set up some outdoor seating that’s covered for both Sports Page and the other venues that are along there.”

Rachie says they plan on closing on the sale of the mall in August, with any back taxes due with the former ownership being paid out of an escrow account. “Everything goes into escrow. The taxes will be paid out of escrow, all the back taxes, everything that needs to be paid. There’s a lot of vendors that need to be paid as well. They will all get paid, and then the rest will go to the former owners, and then we’ll be all caught up and everything will move forward from that point.”

Rachie says he knows the first thing that needs to be done is the replacement of the mall roof which has been badly needed for years.  “It’s really the very first thing that we have to do, we immediately have to fix the roof. As I’m sure the city administrator would tell you, there’s some city assets that really need some protecting right now, so we’re already in the works to get everybody on the roof and that fixed over the areas that are occupied first and then we’ll do the rest.”

Besides the renovation of the mall, the development agreement states that the minimum assessment for the renovated mall would be no less than $30 million. In exchange, the city would provide a ten-year abatement of the incremental taxes generated by the redeveloped mall with the total cost of the tax rebate not exceeding $12-and-three-quarters million.