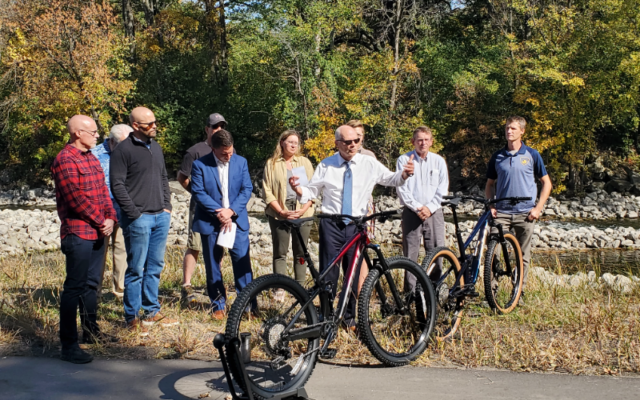 The city and Cerro Gordo County were recently awarded $4.5 million for a bike park that would be specifically designed for off-road and mountain biking activities. The city will initiate the project with the development of plans for several subcomponents, including the High Line Trail, Murphy Park Trail and Bridge, Prairieland Trail Connector, Scrip Road Conversion and Illinois Bridge improvements, as well as crossing safety improvements. The agreement the council approved is for the preparation of preliminary plans and project estimates to assist the city in project planning, bundling and budgeting purposes.

City Administrator Aaron Burnett says there’s quite a bit of engineering work that has to be done to get the city to the point where they can bid out the projects.  “Some of the trails, things like single-track trails can really be more on the fly. You look at the lay of the land and you develop those with the contours of the land, whereas projects like putting a bridge across the river require a lot of engineering, a lot of regulatory oversight, and that’s where expertise like WHKS coming in and getting started right away is helpful in making sure we clear all those hurdles and we’re ready to get this to bid as soon as possible.”

Burnett says construction will include a bridge to be placed across the Winnebago River.  “With the conversion of Birch Drive to a trail, what it will allow is from essentially the Asbury Park/122 area all the way over to Illinois will be a trail, and then from that section on through Murphy Park, going over to the Muse-Norris softball diamonds, that’s where it would connect across the Winnebago at that right-of-way and allow an individual to stay along the Winnebago for the majority of the distance.”

Burnett says the Destination Iowa funds must be committed by the end of 2024, but the city has until the end of 2026 to actually spend those funds.   “Essentially you get that out to bid, you award that bid, you’ve got that contract signed, then you’ve met your obligation by 2024, but all payments have to be paid by 2026. The takeaway is get it done as quick as possible, but you just need to make sure you have every aspect of it at least bid out and under contract by 2024.”

Those projects will be reviewed and brought forward for positioning in the Fiscal Year 2024 and 2025 budgets.