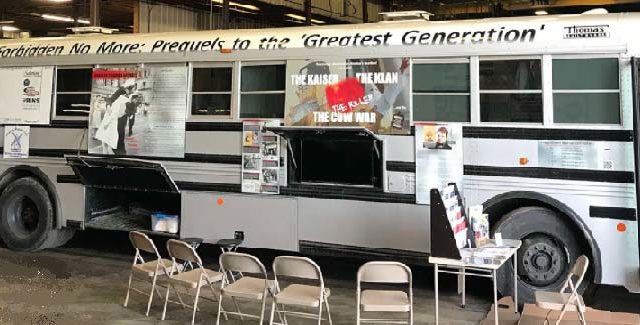 MASON CITY — A repurposed school bus that’s packed with artifacts and stories from Iowa’s past is making its way across the state over the next few weeks.

Author and historian Michael Luick-Thrams of Mason City is the organizer of what he calls the Buseum, which is now on its third vehicle. “These are retrofitted school buses that are outfitted as museums in the front and the last two buses have mini-auditoriums in the back where we have films and guest speakers,” Luick-Thrams says. “This is about our eighth exhibit.”

The latest touring exhibit is focusing on some of the things that may have influenced our parents or grandparents, called: “Hidden or Forbidden No More: Prequels to the Greatest Generation,” like those who fought on D-Day during World War Two.

“People walk up to the bus and they read our intro panel outside and they ask, ‘Well, what are we doing,’ and we’re actually asking, when those young men got out of their platoon boats at Normandy Beach, went up those cliffs and began fighting toward Nazi Germany, what had formed them, what were their life’s experiences before then?” The exhibit touches on five big events or social issues from decades ago which may have helped form that generation’s character.

“We look at the anti-German hysteria of World War One,” he says. “For example, there were serious proposals to put a wall around Wisconsin because of all those ‘disloyal’ Germans. German-Americans were tarred and feathered. Some were lynched. It was actually very serious and German-American culture basically got erased, although every third Iowan has German ancestry and in places like Wisconsin, it’s much higher.”

The Buseum features information on the Spanish flu pandemic of over 100 years ago in Iowa, Iowa and Prohibition, the Ku Klux Klan, and unemployment at the time of the Great Depression.

The Buseum will make a stop in Clear Lake on September 4th. For more information, you can head to www.traces.org