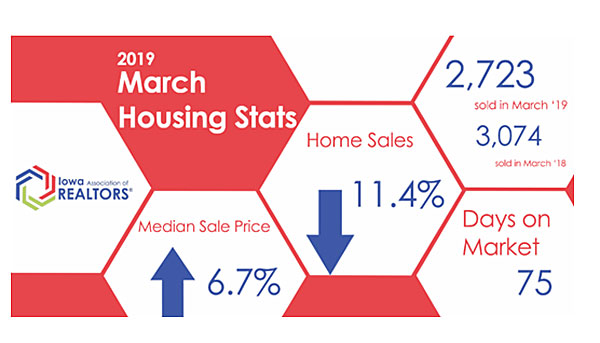 SPENCER — Figures from the Iowa Association of Realtors show sale prices rose in March while the number of homes sold dropped a little more than 11% compared to last year.

Association president John Goede says the weather has an impact in March, but overall, those who sell homes don’t have a lot to complain about. “If you look at our figures this last six years here — we’ve had a little drop in inventory and a little drop in sales made — but actually the last three years, 2016, 2017, 2018, have been like rock stars,” Goede says.

The median sale price for Iowa homes sold in March was up 6.7% compared to last year at $160,000. Goede says you have to look at the larger view.”This year’s rate that we have right now — the ten years previous to 2016 — that would have been the high point. So, we have a very, very good year, it’s just coming off an unbelievably stellar year,” Goede says.

Goede, who sells real estate in Spencer, says Iowa’s wage rate has gone up and that has helped the Affordability Index for home buyers. He says to buy a median home you need a median income, and Iowa’s median income is 100 percent more than needed to qualify for a median house. He says our median income is so good that it could actually buy twice the cost of a median priced home.

Goede says interest rates remain low too — and that also helps home buyers. He says the drop in sales is also something that has to be seen in the bigger picture. “You know the sales are down….statewide they’re down about 280 homes in total,” Goede says. “That’s less than three a county — so it’s really not a big number — it’s just how statistics can play.”