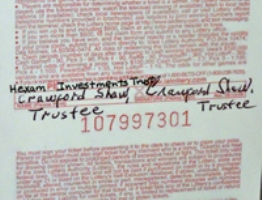 The back of the Hot Lotto ticket that started the Eddie Tipton investigation.

DES MOINES, Iowa (AP) — A national lottery group agreed to pay $1.5 million to settle a lawsuit filed by an Iowa man who claimed that a $9 million jackpot he won in 2011 would have been bigger if the previous one hadn’t been fixed by an insider.

An email released Friday shows that the Multi-State Lottery Association informed directors on Oct. 9 that it agreed to pay Larry Dawson $1.5 million as a “full and final settlement” of his claims. The association had refused to release details of the settlement.

The Iowa Lottery, which is a member of the association, released the email in response to open records requests.