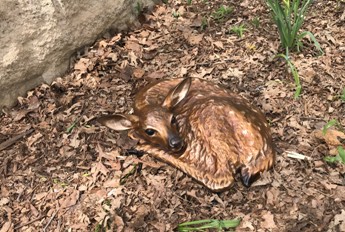 MASON CITY — The “People’s Choice” winner of the annual “River City Sculptures on Parade” exhibit has been announced.

Robin Anderson, president of the group that organizes the display, says the winner was “Little Fawn” by Fritz Hoppe of Platte City Nebraska. That sculpture sits at the MacNider Art Museum.

Anderson says over 250 people cast ballots for the “People’s Choice” contest.  “It was another close ballot, but unlike last year where it was a tie, it was just close. 257 people voted, the majority were local citizens, but that total also includes votes from 19 different states. All but one of the sculptures received at least one vote.”

Since the start of the sculpture program, the city has agreed to purchase the “People’s Choice” winner for permanent display on the sculpture walk. Anderson thanked the City Council at their meeting this week for their support of the project. “I think this is such a wonderful example of a public-private partnership that has brought so much to our community. When you see that item in the budget for the upcoming year, I hope you’ll think favorably upon it.”

The 53-piece sculpture exhibit follows a nearly two-mile walk that leads people on a looping route to the city’s Cultural Crescent and back to the central downtown core.