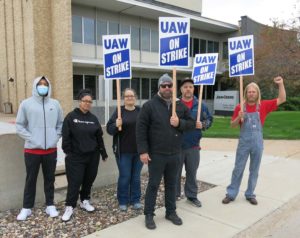 JOHNSTON — An educator from the University of Iowa Law Center says Deere & Company has made a strategic move to seek rulings in state rather than federal court to limit where and how striking workers may picket.

A Scott County district court judge has granted a preliminary injunction that bars striking workers outside John Deere’s Davenport Works from having chairs or fires in barrels and no more than four may be positioned at entry gates. Paul Iversen, who joined the Labor Center at the University of Iowa a decade ago, says a 1931 federal law sets the rules for how federal judges may rule when employers ask for restrictions on picketing.

“One of those rules is you can’t get that injunction unless the chief public safety officer of the jurisdiction, so the chief of police or the county sheriff, says that they’ve lost control of the situation,” Iversen says, “so you never get a federal court (ruling) because no county sheriff that’s going to stand up for election is going to say: ‘I’ve lost control of the picket line.’”

Deere & Company told the state court judge picketers outside its Davenport Works were blocking access and putting themselves and salaried workers going into the plant at risk. A spokeswoman for Deere and Company says the Iowa judge’s order ensures a safe environment for those reporting to work and those exercising their right to strike.

Iversen says companies have historically sought limits on people exercising their right to strike. “The strike is meant to shut down the employer. That is the purpose of a strike,” Iversen says. “Trying to bring in an injunction, saying it’s hard for us to work during a strike — that’s what a strike does.”

Iversen made his comments during the “Iowa Press” program that aired over the weekend on Iowa PBS. Iowa Federation of Labor AFL-CIO president Charlie Wishman, another guest on the program, suggested Deere is trying to break the will of strikers and seeking restrictions on picketing is part of that.

“The actions that are going on as far as picketing and exercising their First Amendment rights and so on and even other things, they’re protected under the National Labor Relations Action,” Wishman said. “Instead, Deere is taking them to court over things like traffic violations in state court.”

In documents filed in state court, Deere attorneys accused picketers of screaming through megaphones and blocking the free flow of traffic into and out of Deere’s Davenport Works. A spokesperson for the union has declined to comment. The legal dispute over the union’s activities in Ankeny centers around whether striking workers can picket outside property Deere owns, but where workers inside the warehouse are contractors hired by another company.