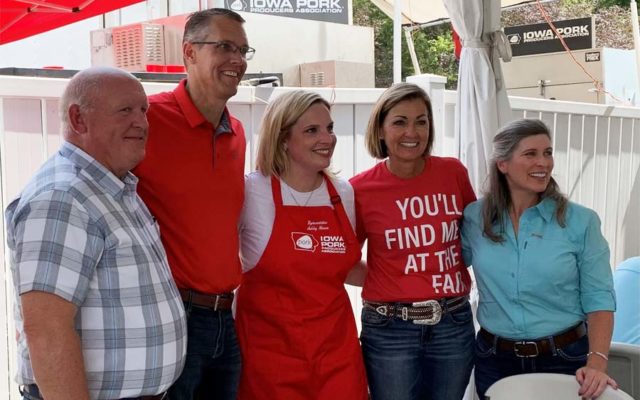 DES MOINES — Republican Congresswoman Ashley Hinson of Marion and Congressman Randy Feenstra, a Republican from Hull, support legislation to override California rules requiring larger pens for pigs destined to be processed and sold in California as bacon, sausage, and other pork products.

Hinson addressed the topic Wednesday shortly after flipping pork chops on the grills at the Pork Tent at the Iowa State Fair.

“California shouldn’t be instilling bacon bans on Iowa,” Hinson said. “…We need access to that market.”

Iowa is the nation’s largest pork producer, but few operations have been retrofitted to meet the larger size requirements for pig and sow pens that California voters approved in 2018 — and that are scheduled to go into effect in January.

“Californians seem to think that their pork comes from the grocery store,” Hinson said, “…but I have seen the process from all the way from the farrowing, to the feeder pigs, all the way to the finishing and I think more people need to have respect for what our pork producers do to feed the world.”

Feenstra flipped pork chops at the Pork Tent earlier in the day. Feenstra said he believes California’s rules will have a ripple effect.

“It’s so detrimental,” Feenstra said. “not only to our hog producers, but as it goes down the pike, it’s going to hit every commodity market.”

Feenstra escorted Pennsylvania Congressman Glenn Thompson around the Iowa State Fair yesterday and the two met with a small group of pork producers in the afternoon — at the Pork Tent on the fairgrounds. Thompson, the ranking Republican on the U.S. House Ag Committee, said California’s rules violate the commerce clause in the U.S. Constitution.

“We’ve got to pass legislation that says California cannot do this,” Thompson said.

Republican Senators Chuck Grassley and Joni Ernst are co-sponsoring a bill that would bar states and local governments from having ag-related regulations that are stricter than federal standards.

Animal welfare groups say it’s more humane to require larger living spaces for pigs as well as chickens laying eggs and young calves being raised for veal. Sixty-three percent of California voters approved what was called the Prevention of Cruelty to Animals Act in 2018. Veal and egg producers say they’re confident their industries will largely be able to meet California’s guidelines that go into effect in 2022.