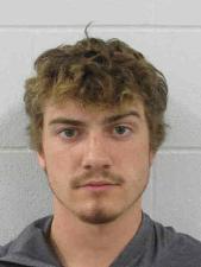 LAKE MILLS — A Lake Mills man who earlier this year was sentenced to five years in prison after being involved in a head-on crash that severely injured ten people on New Year’s Day in 2019 is being released.

22-year-old Michael Olsen was originally charged with six counts of serious injury by vehicle, operating while intoxicated, and second offense possession of marijuana.

The Iowa State Patrol responded to a crash about five miles northwest of Forest City on 120th Avenue south of County Road A-42 at about 2:20 on New Year’s Day 2019 morning when a pickup and vehicle collided. Further investigation showed that Olsen, as the driver of one of the vehicles, was under the influence of drugs and alcohol.

As part of a plea agreement with prosecutors, Olsen earlier this year pleaded guilty to three counts of serious injury by vehicle with all other charges being dismissed. District Judge DeDra Schroeder sentenced Olsen in May to five years in prison on each charge, with all three terms to run at the same time, but as part of his plea agreement, the sentence would be reconsidered within 90 days.

Schroeder on Tuesday suspended Olsen’s prison term and placed him on probation for five years.