Klobuchar says her familiarity with caucus process an advantage 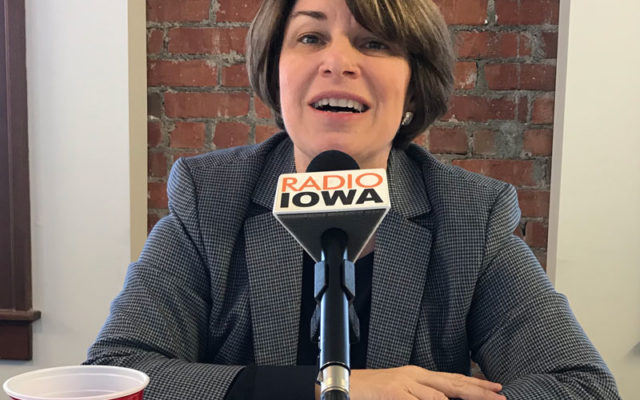 DES MOINeS — Minnesota Senator Amy Klobuchar says she has a tactical advantage over her competitors for the Democratic Party’s 2020 presidential nomination.

“We have caucuses in Minnesota,” Klobuchar said during an interview with Radio Iowa. “They were a big part of how I got started in politics in a really local way.”

“I really view it as a positive because you can’t just come into Iowa in a presidential race and win by dumping a bunch of money in there,” Klobuchar said. “I always had less money than my opponent in every single major race I had. That’s clearly going to be true this time, but you do it with people power…and that’s what caucuses are about.”

Klobuchar is in Iowa, her second swing through the state since launching her campaign for the White House a dozen days ago. Klobuchar is among five U.S. Senators running for president, with a couple of other senators still considering a campaign.

“We’re friends, as you’ve probably heard. A pox on the house of someone that starts going over the line in terms of how we deal with each other because I think that will be not a good thing,” Klobuchar told Radio Iowa. “Sure, there’ll be debates. Not just the woman candidates, also the men will be debating significant issues…but I hope that it doesn’t get personal. I don’t think it has yet. I think you’ve seen us defending each other when there have been unfair attacks and I think that will continue.”

Klobuchar has described herself as a “strong progressive” who has been advancing progressive issues in the senate.

“There are so many examples of this…and this is why I had 34 bills signed into law the last two years — is because I believe in getting things done,” Klobuchar said.

On the eve of her debut as a presidential candidate, Klobuchar faced published accusations that she was a tough, sometimes too-demanding boss.  Klobuchar told Radio Iowa this afternoon that she had “great staff” in the senate who’ve helped her be productive. She also said women candidates and politicians face a different kind of pressure.

“I think women are expected to know everything,” Klobuchar said. “…That’s why a lot of women you see set goals, they put out information on what they’re doing in a different way and I think it’s a good thing, actually, but it can mean that you’re always trying to get it right more tha some of the male candidates, because you’re judged by a different standard.”