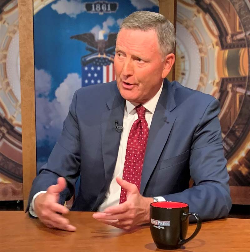 DES MOINES — A leading Iowa conservative says conservatives across the country are tired of Republican election losses — and this week’s special election in Georgia is another blow to former President Trump, who backed the losing Republican candidate, Hershel Walker.

“The midterms were not the success that we should have had and that we were hoping to have,” said Bob Vander Plaats, president and CEO of The Family Leader, a politically active group of Christian conservatives.

The Family Leader will host an event this summer for 2024 presidential candidates and Trump, who announced in November that he was running again, might be in the mix. Vander Plaats said Republicans should avoid choosing a nominee who’s entire focus is “payback” for what happened in 2020.

“I believe that America, in many ways, is making up its mind on Donald Trump,” Vander Plaats told Radio Iowa. “…We thank him for a lot of good things he did and his administration did when he was president. However, because of the 2022 election, 2024 becomes that much more important — that we need to win — and I believe that America right now is saying, you know, President Trump may be your biggest risk to losing in 2024.”

Vander Plaats is encouraging Trump to endorse one of the other Republicans running to be America’s next president.

“We need to choose well about how we’re going to win in 2024,” Vander Plaats said this morning. “…(Trump’s) announcement has not been met with the overwhelming embrace that I think he thought it would and part of any candidate’s decision going forward in a campaign is: ‘Are the people embracing this or not?’”

Democrats won two governorships that had been held by Republicans and GOP results for U.S. Senate and House races fell below what typically happens when a Democrat is in the White House. That was not the “red tsunami” Vander Plaats was expecting in this year’s midterm election.

“America’s speaking that we want to have a vision of where you’re going, where are you going to go in the future, how are you going to unite Americans versus looking back at the past and just critiquing what happened in 2020,” Vander Plaat said. “I’m not saying that election integrity isn’t important, but they don’t want to be just stuck on the 2020 election.”

Vander Plaats has personally endorsed presidential candidates prior to the Iowa Caucuses. He backed Mike Huckabee in 2008, Rick Santorum in 2012 and Ted Cruz in 2016 — al of whom won on Caucus Night.