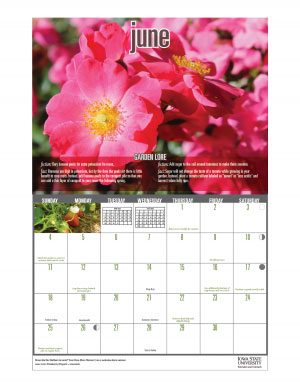 AMES — Iowa State University’s Extension Department is selling a 2023 calendar that seeks to address some of the “Garden Lore” that’s been circulating the state.

Consumer horticulture specialist Aaron Steil says they hear a lot of folklore or home remedies that don’t have a lot of research or evidence supporting them. One involves a popular garden flower.

“You know, we often get a question, if peonies need ants to bloom, and peonies will open with or without ants, the ants are not required for bloom, they’re just there because they’re collecting nectar,” he says. Another myth is you should plant your potatoes on Good Friday. He says planting should happen in mid-April in much of the state for potatoes, and sometimes Good Friday is in mid-April — but the holiday can move around as much as a month — and it can be too early to plan when Good Friday is near the end of March.

The internet is the origin of some of the gardening stories — including one Style has heard quite often. “Planting sweet peppers, or bell peppers next to hot peppers will make your sweet or bell peppers more spicy. And that’s just not how biology works,” Style says. “If you saved the seed from inside that pepper and planted it the following year, the pepper will probably taste different. But the fruit of the pepper is determined by the genetics of the plant. And that doesn’t change whether it’s pollinated by us a bell pepper or sweet pepper.”

Style says the questions have picked up as more people tried their hand at gardening. “Especially since the spring of 2020, and so we’ve been answering many questions like this, there’s lots of information out there and some of its good and some of its bad,” he says. “Hopefully this calendar can help kind of show people the difference between those two things.”

The calendar can be purchased from the Iowa State University Extension and Outreach online store, and you can also find it in most of your local county extension offices. It costs eight dollars.