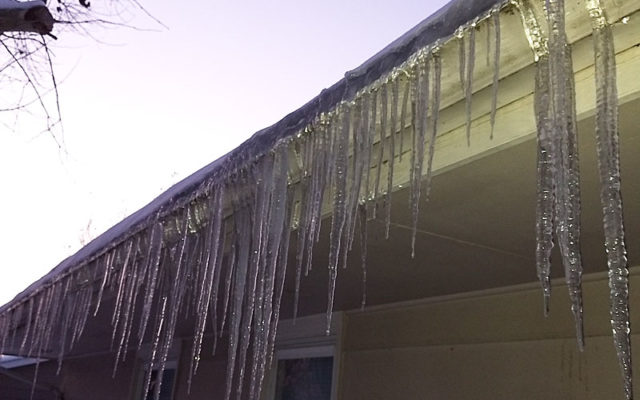 MASON CITY — Snow is now piled everywhere across the state and that includes on the top of our homes.

An Iowa State University Extension mechanical engineer says you shouldn’t have to worry now about that snow causing the roof to collapse.  “There are things to watch for, to be concerned about, but overall we are not in too bad a shape yet,” according to Shawn Shouse.

Shouse says you have to take into consideration the amount of water weight in the snow to determine if it might collapse the roof. You can find that out by taking a core sample of the snow and melting it.

“With the kind of snow density we’re having this winter — that’s going to be up to around three-and-a-half to four feet of snow depth to get to that kind of weight on a roof,” he says. “If this had been really wet heavy snow, we could be hitting close to capacity at two feet to get that capacity.  But so far this winter, the snow has been relatively lightweight, not very dense.”

He says one thing to look for is an uneven distribution of the snow. “The roof works best when the load is uniform over the whole roof,” he explains. “If you’ve got a place where all the snow load is on one side of the roof and the other side is close to bare, that’s a little harder for the structure to handle, when you get uneven loading.  So, there could be some situations where there could be some concern.”

Icicles have formed along the rain gutters of many homes. Shouse says they’re nothing to worry about either. “If the ice gets to be really heavy hanging off the gutter — it might be okay to knock some of that loose if you can safely. But, probably that’s not a big concern,” Shouse says.

When it comes to ice, you do want to be aware of ice that starts to form at the edge of the roof and expands upwards.  These are known as ice dams. “The risk there is it can start to back water up behind that ridge of ice at the edge of the roof and that water can start to work its way underneath shingles and possibly leak into the inside of the roof structure,” Shouse says. “In really bad cases it might even drip onto the ceiling.  Inside the house you might see stains of water dripping onto your ceiling.”

Shouse says you are better off to wait and let mother nature melt the snow and ice off your roof than you are trying to fix it yourself.  “The risk of climbing up on the roof and falling is far greater than the risk of the roof collapsing under snow load,” Shouse says. “So, yes it is very hazardous to get up there and try to rake snow off from up above or work on an ice dam on an icy roof.”

He says there is one device that people use on snowy roofs. He says you could use a long-handled roof rake to stand on the ground and safely rake snow off. “But even so, I don’t know that I would advise doing a lot of that unless you had a really unusual situation where you had uneven loading or an extremely deep drift of snow up there,” Shouse says.  He says the best thing to do is talk to a professional who knows how to deal with these issues and avoid injuring yourself.