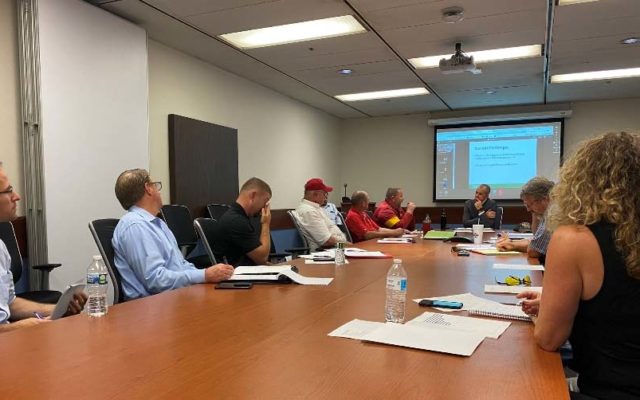 A few college-level programs in the state offer instruction in meat processing, but Naig said more training programs, like apprenticeships, are needed.

“There is a really good meat science program at Iowa State, but that’s a four year or an advanced degree and there’s a place for that from a management perspective or if you’re looking at food safety or specialty products….There’s a few community colleges with meat science programs as well, for a two-year program,” Naig said. “And then we think that there are folks who don’t need either of those and, really, what they need to do is come into a meat locker and do an apprenticeship.”

Naig is chairman of the Artisnal Butchery Task Force, a temporary group created by a state law passed this spring. The group held its first meeting last week.

“What we saw in the last year, year and a half is that the small meat locker was incredibly busy and we think there’s a tremendous opportunity for that to expand,” Naig said, “…so I think what we try to look at, then, is what can we do to try to have an impact.”

The legislature set aside $750 million worth of state grant money to help small meat lockers expand. Naig said the demand is there, from the consumer end. He’s heard from cattle producers who have potential customers for their beef, but can’t find a meat locker to break it down and package it.

“It builds on a great Iowa brand for meat, direct to consumer and I think even branded products that end up in grocery stores and in restaurants is a good thing, too,” Naig said. “To me there’s just tremendous opportunity that also, potentially, can bring more cattle into the state.”

Naig is also lobbying the USDA to make more Iowa meat lockers eligible for the $500 million in federal grants that will be available. A meat processor must be federally-inspected or enrolled in a USDA program to ship meat across state lines to qualify. Naig said about half of Iowa’s 250 meat lockers are state inspected and under current rules would be ineligible for the federal grants.