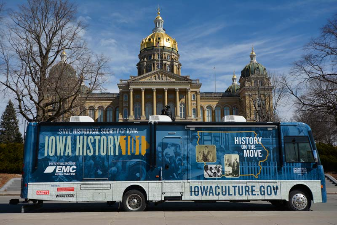 DES MOINES — As the Calhoun County town of Pomeroy celebrates its sesquicentennial this weekend, one of the featured attractions will be a custom-Iowa-built RV that’s the state’s mobile history museum.

The State Historical Society of Iowa vehicle was parked by the pandemic the past 16 months. Michael Morain, spokesman for the Iowa Department of Cultural Affairs, says it’s time to get it back on the road again. “The new exhibit has 56 historical artifacts that explore 13,000 years of Iowa history,” Morain says. “All of that is within the 300 square feet of the Winnebago.”

The mobile museum debuted in 2017 and over the course of three years made 175 stops in all 99 counties, attracting some 65,000 visitors, including more than 11,000 students. The RV is now starting its second three-year statewide tour with a completely different exhibition inside.

“It is all-new so even if you think you’ve seen it, but wait, there’s more!” Morain says. “The theme for this exhibit is Iowa’s People and Places so it’s a pretty broad framework but there is a new collection of exhibits that were curated by the experts at the State Historical Museum and there’s some great stuff in there.”

The state’s massive underground vault contains some 209-million items relating to Iowa history, so he says it’s an exceptional challenge to narrow it down to a few dozen items for the mobile museum. The latest array is widely varied. “One of my favorites is one of the spacesuits that astronaut Peggy Whitson wore into space,” Morain says. “There are knitting needles that an Iowa First Lady used to knit clothing for Civil War soldiers and World War One soldiers. There’s a menu from Soviet leader Nikita Khrushchev’s visit to Des Moines during the Cold War.”

Other items on display include a birchbark lunchbox a Cerro Gordo County boy used in the 1870s, a Meskwaki cradleboard from the late 1800s, and a University of Iowa pennant from Edward Carter of Monroe County, the first African American to get a medical degree from the University of Iowa, in 1907.

In addition to this weekend’s festivities in Pomeroy, the mobile museum will be making stops in: Columbus Junction on July 27-31 for the Louisa County Fair, Britt on August 6-8 for Hobo Days, Wilton on August 20-22 for Founders Day, Shenandoah on September 25th for Shenfest, and Lamoni on October 3rd for the Annual Fall Festival.
iowaculture.gov