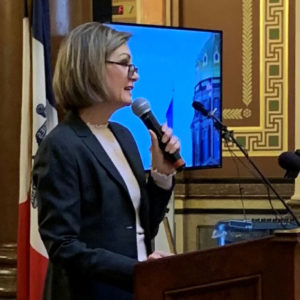 Reynolds said, via tweet Thursday morning, that “Republican governors and candidates must show voters an alternative to the chaos and dysfunction” in the federal government.

“Tell them what you’re going to do. Follow through,” Reynolds said during a panel discussion earlier this week at the RGA gathering in Florida. “And how about we respect the people that we serve.”

Twenty-eight states currently have a Republican governor, but Democrats defeated GOP candidates in three of those states last week. There are three governors races in 2023. Reynolds, as the Republican Governors Association chair, will now be leading fundraising and other efforts to support GOP candidates for governor in Kentucky, Louisiana and Mississippi.

Sara Craig Gongol, who has served as Reynolds’ chief of staff for nearly four years, is leaving to take over as executive director of the Republican Governors Association in January. Craig Gongol was a consultant on Governor Reynolds’ 2018 campaign and she’s worked for a number of state and federal candidates in Iowa and elsewhere.